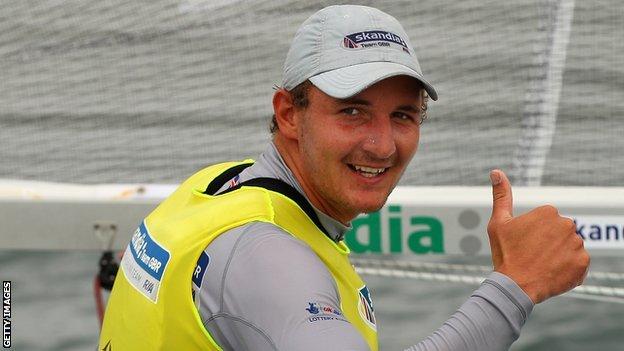 Great Britain sailors Giles Scott and Ben Ainslie are leading the way in the Finn class at the halfway stage of the Skandia Sail for Gold Regatta.

Scott leapfrogged three-time Olympic gold medallist Ben Ainslie at the top of the standings on a windy day at Weymouth and Portland.

The 2011 Finn world champion said: "Being out in front is always a nice position to be in.

"There is pressure but I can't say I am losing sleep over it."

Ainslie is eight points behind his British team-mate but he is grateful for the challenge in the build-up to the Olympics.

He said: "I haven't been 100% at this regatta but, to be honest, it is a great opportunity to get out on the water and see how the competition is doing and know more about the venue.

"So it is completely worth doing and hopefully I will start to feel better towards the end of the week."

Other Britons at the top of their leaderboards include reigning Olympic Star champions Iain Percy and Andrew Simpson, and Paralympic Skud sailors Alexandra Rickham and Niki Birrell.

The Sonar trio of John Robertson, Hannah Stodel and Stephen Thomas are also leading the way.