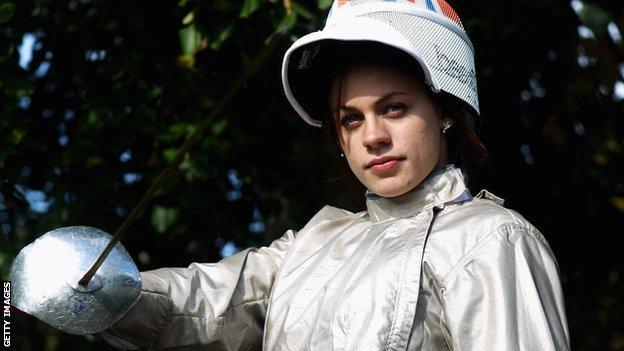 Sophie Williams believes she was chosen to represent Team GB at London 2012 because of her future prospects.

The 21-year-old fencer from Winsley, who is currently ranked 73rd in the world, was handed a wildcard entry ahead of highly-ranked duo Jo Hutchison and Chrystall Nicoll.

"It was about having medal potential this year and in the future," Williams told BBC Wiltshire.

"They identified me as having potential in 2016. That's why I was selected."

Kruse and Sheppard are the only two Britons to have qualified on merit, while Williams received one of the eight discretionary call-ups - meaning British Fencing's selectors are ultimately free to select anyone as long as they follow their own selection policy.

Alex O'Connell and Jon Willis, along with Hutchison and Nicoll, were overlooked for selection and their subsequent appeal was thrown out by an independent panel.

Although she was a surprise inclusion, Williams is ready to prove herself at this summer's competition.

"I want to get a medal this time and that's what I've been training towards," she added. "I definitely think I'm capable of it.

"When I first found out it didn't really sink in. For the next 24 hours I just kept thinking 'wow, I've been selected'.

"The nerves are definitely going to start setting in now. It's going to be fantastic and I'm going to put my all in to training so that it pays off."