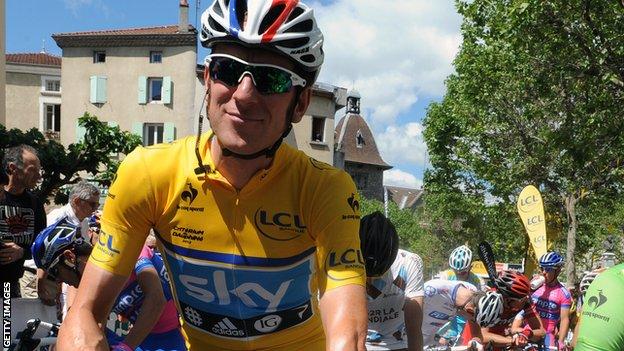 The Team Sky rider, an Olympic hopeful, remains 38 seconds ahead of Germany's Tony Martin in the overall standings.

Wiggins was just under a minute behind Vichot but none of his main competitors, including Cadel Evans, could make any ground on him.

Reigning Tour de France champion Evans threatened Wiggins' hold on the lead when he attacked on the descent of Grand-Colombier, but the defending champion battled back and stayed in the peloton with Evans to the finish line.

Vichot broke away seven kilometres from the end of the Saint-Trivier-sur-Moignans to Rumilly course, and finished 26 seconds ahead of Egoi Martinez and Dmitry Fofonov to record his first stage win in this race.

"We did what we had to do and once again we've defended the jersey," said Wiggins

"There was a bit of bluffing going on from some of the local guys as we approached the top of the Colombier which caught us out a bit, but that was about it.

"They warned us that it was a dangerous descent but then went full gas and caused the bunch to split.

"Cadel and three of his guys managed to stay in that group and it was a bit of an error on our part. We rallied though and the team did an amazing job to close things down.

"Once we'd got them in sight I was feeling good so I finished the job off to ease some of the pressure on the rest of the boys. There were no problems in the end and it was a straightforward finish."

Saturday's 167.5km stage from Saint-Alban-Leysse to Morzine contains more hilly terrain before a long descent to the finish line.

Wiggins took the race lead on Monday, and he extended his lead by winning Thursday's time trial.