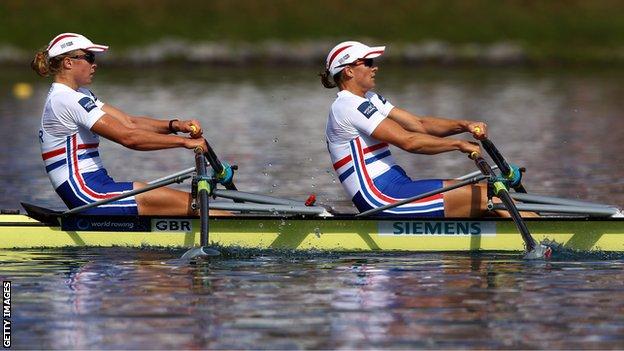 I'm massively sympathetic to both Aaron and Lutalo

Aaron Cook, world number one in the under-80kg division, will not be going to the Olympic Games after the BOA ratified Lutalo Muhammad's nomination for London 2012.

GB Taekwondo overlooked the world number one three times in favour of Muhammad, who is European champion at the under-87kg category but ranked 59th in the world in the under-80kg division.

Cook left the GB set-up a year ago and his non-selection for London 2012 has provoked a huge row within the sport and beyond.

"We are extremely disappointed by the way in which British Taekwondo's selection process has been conducted," World Taekwondo Federation secretary Jean-Marie Ayer said.

The 29-year-old Scot won the individual C1 gold on Saturday before teaming up with Richard Hounslow to take victory in the C2 on Sunday in Cardiff.

"It is such an 'on the day' sport, so to win any medal at all is fantastic," Florence told BBC Sport. "To win two is amazing and two golds is unbelievable. It is just the ultimate."

Tim Baillie and Etienne Stott, who will also compete for Team GB in London in the C2, finished fourth.

Wiggins, 32, retained his title in the French Alps, finishing one minute and 17 seconds ahead of fellow Team Sky rider Michael Rogers of Australia.

"It's a big win but I wouldn't say I'm the favourite for the Tour de France (which begins on 30 June)," said Wiggins.

Former world champion Tyson Gay won his first race after a year's absence at the Diamond League meeting in New York. Gay, making his comeback from a hip injury, won his 100m race in 10.00 seconds running into a strong headwind.

The pick of the Brits was high jumper Robbie Grabarz, who reached new heights with a personal best clearance of 2.36m, although he had to cede victory on the night to American Jesse Williams.

Andrew Osagie took three quarters of a second off his personal best in the 800m, running 1:44.61, while there was a season's best time of 50.69 for Christine Ohuruogu, who was fourth in the 400m.

Kenyan 800m sensation David Rudisha set a world-leading time of 1:41.74, a mark only he and former world record holders Wilson Kipketer and Sebastian Coe have ever bettered.

British Triathlon has included two domestiques in its team of six for the London Olympics.

Alistair and Jonny Brownlee are joined by Stuart Hayes in the men's team, while Helen Jenkins will race alongside Vicky Holland and Lucy Hall.

Hayes and Hall take on domestique roles, meaning their duty is to help Jenkins and the Brownlees win Olympic gold in Hyde Park this August.

World champion Alistair Brownlee had a successful return from injury at the weekend, crossing the line with brother Jonny to record a joint-victory at the Blenheim triathlon near Oxford.

The pair confirmed their place with a British record of 475.77 points in the synchronised 10m platform at the Olympic trials. Daley also won the individual event at the trials.

The first British women to compete in an Olympic boxing tournament have been named in the final Team GB squad.

Nicola Adams,Natasha Jonas and Savannah Marshall will represent Britain when women's boxing makes its Olympic debut in London this summer.

Anthony Ogogo and Josh Taylor were also confirmed in the men's squad for the boxing event.

You can view the full squad here.

Zara Phillips was nominated as part of the five-person eventing team for the Olympics after a third-place finish behind winner William Fox-Pitt at the Bramham International Horse Trials.

The event was effectively a final trial for the British riders and world number one William Fox-Pitt won both feature three-star classes.

Commonwealth bronze medallist Zoe Smith will make her Olympic debut this summer after being named in the five-strong GB weightlifting squad for London 2012.

Perdue will be following in the footsteps of her father, Terry, who competed at the 1968 and 1972 Olympics.

"I can't describe in words how happy I feel and I keep pinching myself to make sure I'm not dreaming," said the 36-year-old, who combines training with full time work at a refuse collection centre in Leeds.

World champion Mhairi Spence is determined to extend Britain's successful Olympic record in the modern pentathlon after her selection for London 2012 was confirmed last week.

Britain's women have medalled at every Olympics since their inclusion from 2000, and Spence said: "I hope we can do the other girls proud and carry on the success so we can say we are part of their legacy."

Alison Young won gold in the Laser Radial event at the Skandia Sail for Gold Regatta in Weymouth.

Great Britain won 10 medals across the 13 Olympic and Paralympic classes, including 4 gold medals, although Young was the only Olympian to win.

Ben Ainslie had to settle for silver in the Finn class behind Giles Scott, Britain's former world and European champion who will not be competing at London 2012.

Luke Patience and Stuart Bithell claimed silver in the men's 470 class, while Hannah Mills and Saskia Clark won bronze in the women's event.

There were also bronze medals for Olympians Iain Percy and Andrew Simpson in the Star and Nick Dempsey in the men's RS:X event.

Great Britain's women claimed fifth spot in the Investec London Cup with a comfortable 3-0 victory over Ireland in their final competitive fixture before the Olympic Games.

Britain had earlier missed out on a place in the semi-finals after losing to South Africa and Germany.

Gold went to the Netherlands who beat Australia 4-1 in the final.

The 21-year-old won her maiden World Cup title in Bucharest last week and followed that up with gold in Estonia at the weekend.