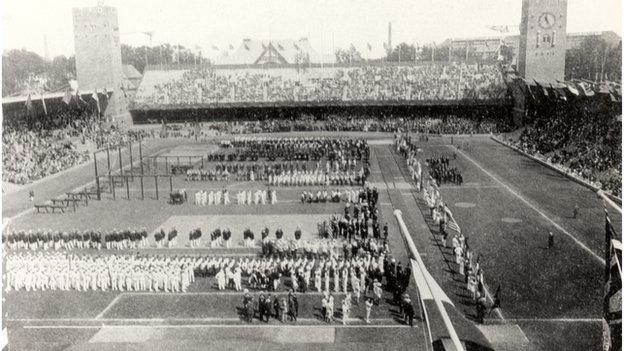 "There are so many stories in the walls," says Gunilla Lyden, archivist, enthusiast, and key-holder to perhaps the best balcony in world sport.

Her office (with balcony) lies up a stone spiral staircase in one of the most seductive sporting arenas anywhere: Stockholm's Olympic Stadium.

Its brown brickwork is handsome and its scale is intimate.

And it is the oldest Olympic stadium still in use - for events ranging from local school competitions all the way up to the Diamond League.

Lyden describes being among the 14,000-capacity crowd watching Usain Bolt win the 200m at a Diamond League meeting in July last year. It was so quiet, she says, "you could hear Bolt breathe".

After much fiddling with keys, she opens the door and I am allowed to step on to her office balcony, with a view over the entire track.

"This is where I can speak to my people," she says, with a twinkle. "No, but the architect: he wasn't just creating a stadium. He was creating a dream."

The reality was impressive enough. The Stockholm stadium saw 83 world records set at the 1912 Olympics. Perhaps the most glittering was that set by an 18-year-old American, Donald F. Lippincott.

This was how one American "One Cent" newspaper reported his achievement at the time: "LIPPINCOTT, PENN ATHLETE, CREATES WORLD'S RECORD. Stockholm, July 6. At the opening day's events of the Olympic games Donald F. Lippincott of the University of Pennsylvania hung up a new world's record for the 100 metres in heat 16, when he ran the distance in the marvellous time of 10 3-5 seconds."

These days, Donald Lippincott III remembers his grandfather as "a commanding presence, but not overbearing". A photograph of the time shows a bulky 18-year-old, with the slight slouch of a teenager unused to the attention.

As he crouched at the start of a race, he tried to relieve excess nerves by squeezing a cork. It is still in the family's possession.

But Lippincott almost did not make it to the Games at all. He had to raise, by himself, the money for his passage to Stockholm.

And as his grandson recalls: "There is some lore in the family that his mother may have tried to block his going because he was her baby - the third child. And two months before, the Titanic had sunk. She couldn't bear the thought of losing him."

So Mrs Lippincott persuaded her husband to write their son a letter, saying that business was slumping. Donald Lippincott III laughs. "There's no record of business ever being bad before, but just by coincidence, it was suddenly bad. But then when he came up with (the sponsorship) money, it was hard for his parents to say no."

Lippincott ended up with the bronze in the final. Among the several false starts was one where he and the eventual winner ran the entire race, with Lippincott breasting the tape first, before they were called back.

But he still had the world record from the heats - a record made official by the existence of the new International Amateur Athletics Federation.

And 10.6 seconds is, as Imre Matrahazi, the IAAF's current keeper of the records, points out, an excellent time. "If you imagine the quality of the clay tracks then - and they didn't have starting blocks, they had to dig holes in the tracks. It really is an impressive time, 10.6 seconds."

That time was recorded by three men, in straw hats, standing next to the finish line and clicking their thumbs more or less simultaneously on three stopwatches.

The Stockholm Olympics did experiment with "electric time-keeping" and photo finishes. But it would be 1921 before the first IAAF-sanctioned electrical time-keeping device was used.

These days, a slit-film camera is aimed at the leading edge of the finish line, and takes 3,000 frames per second, as the runners clatter past.

The technology and the athleticism are still improving. Matrahazi says, having watched Bolt set the latest world record of 9.58 seconds, he can imagine 9.5 seconds being within reach.

Wherever the 100m is headed next, though, the Swedes will always have a boast of their own. Stockholm's stadium remains an impressive arena, still being used for sport a century after it was built.

And it holds one achievement which will never be taken away. It is where the world's fastest man was - for the first time - officially fastest.