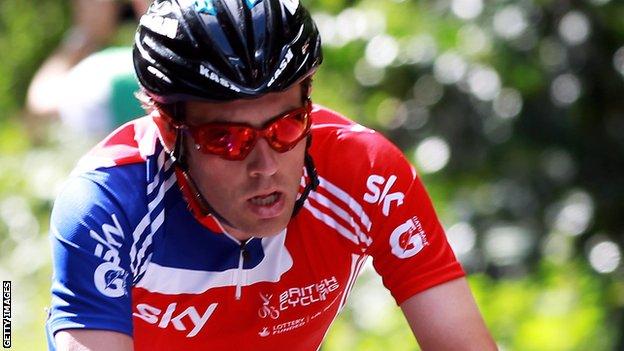 Alex Dowsett says the decision to allow drug cheats to represent Great Britain could have cost him his Olympic dream.

David Millar, who admitted to taking performance-enhancing drugs in 2004, has been named on GB's road cycling shortlist for London 2012.

"If that rule hadn't have been overturned, I'd like to think I'd be the next one in the line-up," Dowsett told BBC Essex.

I know David reasonably well now and if there's anybody who is reformed it's him. I wish the whole team all the best for race day

"But those are the cards I have been dealt with."

Millar would have been ineligible had the British Olympic Association's policy of lifetime bans not been overturned by the Court for Arbitration for Sport in April.

The 35-year-old Scot had previously insisted he would not seek to overturn the BOA's lifetime ban and booked a holiday to coincide with the Games.

But he is now among eight men who will be whittled down to five for London's road races and time trials.

"There's an element of what might have been had that rule not been overturned," added National Time Trial champion Dowsett.

"When Millar was let back in he became a competitor for a place. It was another hurdle I had to overcome."

The 23-year-old from Maldon believes Millar should be given a second chance, but has called for future cheats to receive lifetime bans.

"I think Millar was riding in an era when people were using a lot more performance-enhancing drugs," he said.

"But now it's very rare that anyone takes that risk because the consequences are so severe.

"We're all now big believers in clean cycling. And the amount we're tested it would be stupid of us to try anything.

"So for the guys from that era it's something that happened. Maybe it was out of their hands a little bit - there was a lot of pressure from teams.

"But now, because there is no excuse to do it, I don't see why there shouldn't be lifetime bans.

"I know David reasonably well now and if there's anybody who is reformed it's him. I wish the whole team all the best for race day."

Dowsett, a time trial silver medallist at the 2010 Commonwealth Games, was also hindered by a troublesome elbow injury during the qualifying period.

He suffered an infection after breaking the joint in three places following a fall in Belgium in March.

"I'm coming back up to fitness quickly so I thought [the selectors] may give me the benefit of the doubt and give me a chance but they said I was a risk coming back from injury," he said.

"At an event like this they're not willing to take any risks. So I'm disappointed. But if I win a gold medal in Rio none of this will matter."