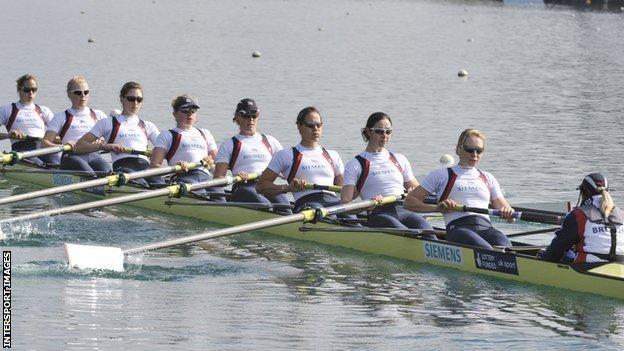 Emily Taylor says the Team GB women's eight crew have a great chance of winning a medal at the London 2012 Olympics - and could secure gold.

The Lincoln rower was named in the squad last week, although she is still unsure if she will be part of the team.

Taylor, 24, told BBC Lincolnshire: "Last year they won a bronze medal at the World Championships so we are definitely in with a chance of a medal.

"I don't see why we can't get gold if we have a perfect race on the day."

She added: "We have a lot to work on from our World Cup performances this year.

"But I think that is due to changing the crew around a lot and not being able to gel, which we will be able to do at a training camp after the final World Cup."

Taylor took up rowing seven years ago when she went to a training session while on freshers' week at Durham University.

"I went along to the first training session, which was a horrendous circuit session," Taylor recalled. "I got into a boat on the second training session and fell in love with it - it took over my life."

The journey to Olympic selection started in October 2005 and Taylor will get one final chance to stake her claim for a place when she takes part in the latest World Cup event in Munich, Germany.

"It's still a bit stressful because the boat hasn't been selected," Taylor added. "There are ten of us going but only eight will be rowing so the other two will be reserves.

"The coaches will hopefully have more of a solid decision after the next World Cup event. I will be rowing in a pair because they are trying out different combinations.

"We will do a bit more internal testing after the World Cup and then put together a team we believe will be the Olympic boat.

"The women's squad is so strong and everyone is saying how much stronger it is than the last Olympics. There is such depth."

But whatever the decision, Taylor said the crew could change and the two not selected must play their part and be ready to step in at short notice.

"In the last Olympics in Beijing there was a lot of illness and there were a couple of subs in the boat, so anything can happen," she added.

"Even if I am a reserve it will still be an important job and I will be excited but obviously I would rather be in the eight.

"Hopefully it will go the right way but even if it doesn't there will be more of a sense that it will definitely happen.

"It will be a fantastic experience whatever."