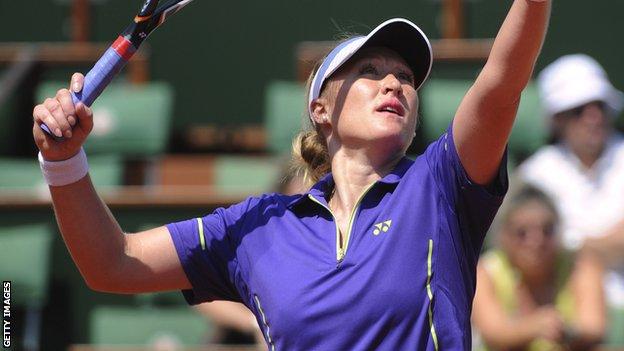 Elena Baltacha is anxiously waiting to find out whether Team GB are granted a second wildcard for the Olympics.

With no British woman qualifying automatically by virtue of their world ranking, the Lawn Tennis Association has asked for two slots in the draw.

If only one is approved, if seems certain to be taken by Anne Keothavong.

"If I don't get a wildcard then that's fate," Baltacha told BBC Look East. "It would be a real honour and an amazing experience but I'll have to move on."

The 28-year-old Ipswich-based Scot continued: "With all the Fed Cup games I've played for my country, it would be an honour if they do give me a wildcard for the Olympics."

The world's top 56 players automatically qualify for London 2012, with each nation limited to four competitors.

New British number one Keothavong is currently ranked 76th, while Baltacha, who was as high as 50th last year, is now down to 91st.

Last year was Baltacha's most successful to date, as she reached the second round of every Grand Slam for the first time in her career, but 2012 has been more of a struggle.

She has fallen down the rankings and this week lost in the second round of the Aegon Classic to young compatriot Heather Watson.

Baltacha puts her poor form down to ongoing efforts to add variety to her game.

"We needed to look at the serve again to try and make that much stronger. We've also been looking at coming forward and mixing up my tactics as well.

"I knew it was a risk but I'm glad I took it. All I need now is to get a bit of momentum. Once I get that I really feel I can move up those rankings," she said.