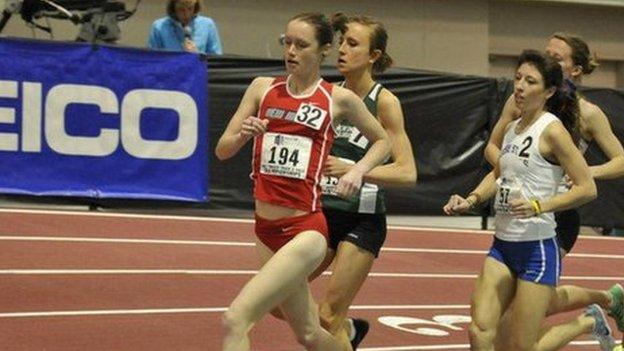 Herefordshire athlete Sarah Waldron is hoping that her recent success in the United States will lead to a place in Britain's European Championships squad.

Waldron finished sixth in the 10,000m at the US Collegiate Games and is now awaiting Tuesday's squad announcement.

"I was delighted with my run as I was competing with the very best athletes in America," said Waldron, 24, from Pudleston, near Leominster.

"In many ways the collegiate games are pretty much the student Olympics."

She told BBC Hereford and Worcester: "They bring together some amazing talent. To finish in the top six was fantastic and has been a real boost to my confidence."

While she has now finished both her Masters degree and athletics career at the University of New Mexico, she has set herself big targets back in the UK.

Although I was nervous beforehand coming to America was the best thing I could have done. I feel I've really developed not only as an athlete but also as a person

Although planning to compete in Olympic trials at Birmingham's Alexander Stadium later this month, she recognises that she is a long shot for the London 2012 Games.

Her main Olympic goal is Rio de Janeiro in four years' time when she aims to compete the marathon, but she believes the trials, from 22-24 June, will provide valuable experience.

Before that, however, she will find out whether her hopes of a place on the plane to the European Championships in Finland have been realised.

"Having been in America for so long, it would be great to put a GB vest on again, especially at senior level," she said.

"But I am taking nothing for granted as there are a lot of good runners chasing places on the team."

Waldron admits that she will be sad to leave her adopted home in Albuquerque as she is acutely aware of how her career has benefited from her time in the United States.

"Although I was nervous beforehand coming to America was the best thing I could have done," she said.

"I feel I've really developed not only as an athlete but also as a person.

"The training facilities are excellent and I know I have improved so much during my time out here."