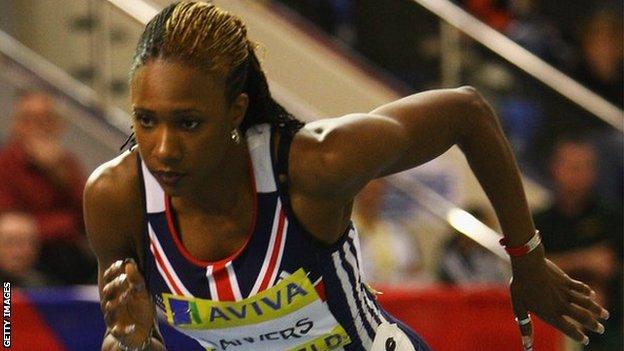 British athlete Tasha Danvers, an Olympics bronze medallist, has retired because of a series of injury problems.

She said: "It's extremely disappointing not to be able to put myself into contention for London 2012 selection.

"Based on my training at different stages, my coach (Malcolm Arnold) and I believed we had a genuine chance of making it. But the setbacks have been too many to overcome."

The London-born athlete has been most recently sidelined by an Achilles problem and also missed the 2009 World Championships.

Danvers won Commonwealth Games silver in 2006, less than 18 months after giving birth to her son, and has made every final she has contested since 2004.

Having missed the 2004 Olympics because she was pregnant, Tasha Danvers went on to win bronze four years later - despite finishing second in the Olympic trials, behind Perri Shakes-Drayton.

She added: "Since winning Olympic bronze in Beijing, I have made so many sacrifices to fulfil my dream of competing in London.

"Making the decision to relocate back to the UK meant leaving my seven-year-old son behind in America, which is the hardest thing in the world to do.

"But we genuinely believed I could step onto that podium again and with the support of my family, Malcolm Arnold, UKA, the medical team and the National Lottery, I've done everything possible to try to achieve that. Sadly my body has had enough."

Arnold said: "This is the worse possible news for Tasha, but there is no doubt she has thrown everything at trying to make London.

"She is an Olympic medallist and that pedigree doesn't just disappear. I was confident that if we could get her to the Games she would have been very competitive.

"This is the flipside of the Olympic dream but career-ending injuries are a fact of life at this level of sport. Our medical team have worked incredibly hard but sometimes the body knows best."

Great Britain head coach Charles van Commenee added: "We don't have too many current Olympic medallists in our team and in an ideal world they would all be with us in London.

"Tasha knows what it takes to be competitive and make the podium, which would have been a huge advantage.

"Retirement is a hard decision for any athlete, but when the decision is taken out of your hands so close to an Olympic Games it must be even tougher. I wish Tasha all the very best."