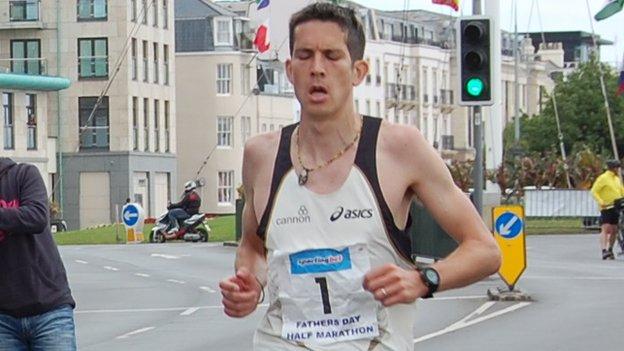 Great Britain Olympic marathon runner Lee Merrien cruised to victory in his final race before London 2012 as he won the Guernsey half-marathon.

The 34-year-old finished in 1:06:03, more than eight-and-a-half minutes ahead of second-placed Steve Dawes.

"It was a good, hard workout and was around where I was expecting, so I'm satisfied with the run," Merrien told BBC Guernsey after the race.

"The time wasn't really a factor for me, it was more of a marathon-pace run and so I was hoping for around 65-66 minutes so it was OK, in terms of marathon pace that was pretty much bang on."

And Merrien said he enjoyed his final run on home soil before the Olympic marathon in London later this summer.

"It's a little bit special in that it comes in the quieter time in the road racing programme and more people come out.

"It's always had a good turnout and the fact that it's Olympic year makes it seem a bit more special.

"It's something to kick on from and take away with me when I leave Guernsey and train for the big one."