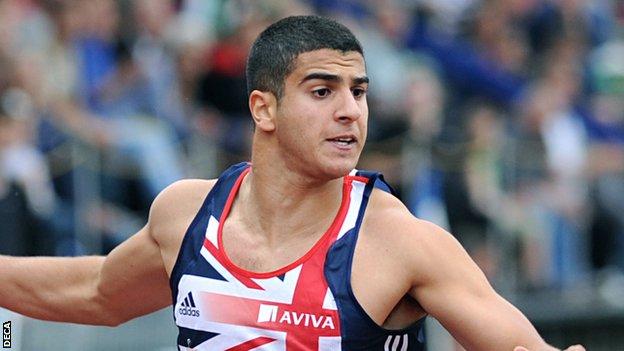 Britain has an emerging crop of young sprinters who could one day challenge Usain Bolt, according to fellow athletes ahead of this weekend's Olympic trials in Birmingham.

Adam Gemili, 18, and James Dasaolu, 24, have been identified as future stars.

British long jump record holder Chris Tomlinson told BBC Sport: "Gemili might not challenge Bolt in the next year or two, but why not in four or five?

"Adam Gemili might start a revolution in the 100m runners and James Dasaolu is so talented. If he does not get injured and stays healthy he will run fast, he is rapid. Those two might just set the British sprinters alight and a new circle will come through."

"Why can't we have someone running 9.7 seconds and wearing the British flag?"

Gemili's time of 10.08secs at a recent meeting in Germany made him the second fastest European this year after France's Christophe Lemaitre.

The 18-year-old, who will come up against Dwain Chambers in the 100m at the trials, is just the second Briton, along with Dasaolu, to achieve the Olympic A standard.

European and Commonwealth champion Andy Turner, who will go in the 110m hurdles in the final race of the trials at 1800 BST on Sunday, believes Gemili is just one of a host of young sprinters who can make an impact.

Speaking on London Calling on BBC Radio 5 live, he said: "He is a massive talent - very raw - and I think he's got the potential to break 10 seconds.

"There's other athletes out there as well under the radar, maybe not at this second in time, the likes of James Dasaolu, who's just been injured his whole career but every now and again will come out and run 10.0 or 10.01.

"The atmosphere is going to be unbelievable and the pressure immense. When it was announced the Olympics were going to be in London, that became the focus for a lot of athletes and the time is nigh."

"Simeon Williamson is another guy who can go sub-10.0. Harry Aikines-Aryeetey's another guy. Whether they're ready for it now I'm not too sure but potentially we have got some talent."

World 5,000m champion Mo Farah has confirmed he will run the 1500m in Birmingham to work on his speed and says he is "really looking forward to competing in the trials".

But a number of athletes have had to withdraw with triple jumper Nathan Douglas - who will probably also miss the Olympics - and 2009 World Championships 800m bronze medallist Jenny Meadows both absent because of injury.

But one athlete who will be competing, Andrew Osagie, has revealed how he has been inspired by just three words from 1980 Olympic 800m champion Steve Ovett.

He said: "I spoke to Steve Ovett in New York two weeks ago and that was a big positive for him to say to me 'You've got something'. Those few words probably mean more to me than sitting down and having an hour conversation with a coach."