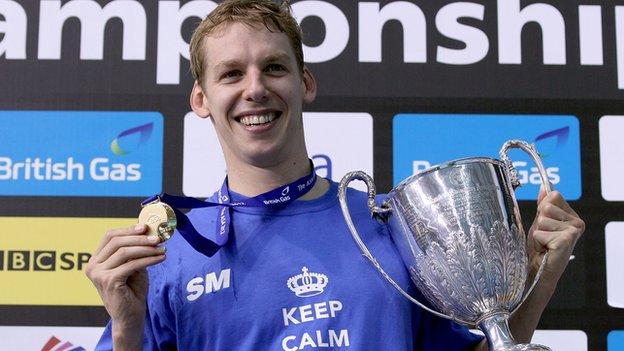 David Carry will swim at his third Olympics after winning 400m freestyle gold at the ASA National Championships.

He recorded his best time since 2008 to secure the Fina 'A' time needed to make Team GB for London 2012.

"You always dream it will come together on the day so for it to actually happen was so special," said the 30-year-old.

World and Olympic champion Rebecca Adlington also impressed in Sheffield, winning gold in the 200m to strengthen her claim for a relay spot.

Welsh teenager Ieuan Lloyd led for much of the 400m freestyle final at Ponds Forge on his way to a lifetime best of 3:48.10 but Carry overhauled him on the final 50m to take gold.

"I've never been so emotional after a swim before," added Carry, who was near to tears. "Just before the first trials I had a back injury, which was the first time I've had an injury in my whole career.

"Knowing that I had this one last chance to stand up and perform, it was a really special moment to win it.

"I knew I'd put a huge amount of effort in - more than any other season since the last Olympics. But the more that I trained, the better my body seemed to get so that was a huge encouragement for me."

Adlington had already been confirmed in both the 400m and 800m in London and could now compete for a third gold, in the relay.

"I was really unsure how that was going to go," she said. "I don't have a lot of speed, I'm not rested and I felt really sluggish after this morning, so to come away with that time and a gold is really pleasing."

Lizzie Simmonds and Kathryn Johnstone also took gold on the first day of the meet.

Simmonds, who has qualified for London 2012 in the 200m backstroke, claimed 100m gold in 59.89, but she will not contest the event at this summer's Games as Gemma Spofforth and Georgia Davies took those spots at the first Olympic trials in March.

Johnstone broke the Scottish record twice in the space of a day as she secured 50m breaststroke gold with a time of 31.69.