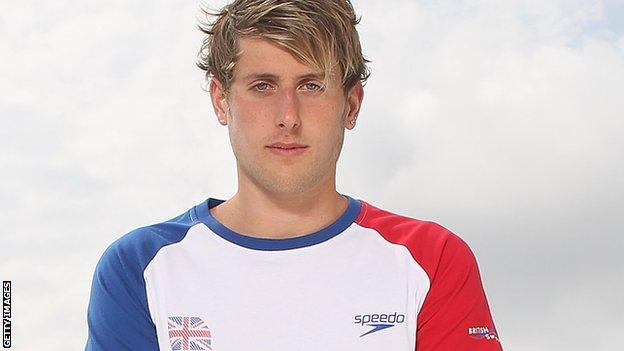 Chris Walker-Hebborn and Marco Loughran secured their places at the 2012 Olympics on day two of the ASA National Championships in Sheffield.

Walker-Hebborn won the 200m backstroke while Loughran came second, with the winner admitting "I am just so happy to be on the team".

Ieuan Lloyd won the 200m freestyle, to earn an individual spot at London 2012 to go with his place in the relay team.

But Antony James and Molly Renshaw failed to make the qualifying times.

Time was running out to secure qualification but Walker-Hebborn, who came down with laryngitis just before the first trials in London in March, made no mistake as he won in 57.17 seconds.

There was also a happy ending for Loughran who was beaten for a place in the 2008 team by Commonwealth champion James Goddard, only for the latter to subsequently withdrew from the backstroke to concentrate on the individual medley.

"It's been four years. Ever since Beijing, when Jimmy Goddard pulled out of the 200 backstroke, all I've had in my head is an empty lane because that should have been my spot, and now it is," said the 23-year-old.

Lloyd, who was narrowly beaten in the 400m freestyle by David Carry on Wednesday, went one better to take first place from Carry in the 200m freestyle and earn an individual place at London 2012.

"It's great to swim the 200 now in a faster time than I did in London [at the first trials] because I am not fully rested. It is great to have the individual to look forward to in London," said the 18-year-old Welshman.

James missed the cut for the 100m butterfly by 0.1secs while Renshaw missed out by less than a second in the 200m breaststroke.

In other events at Ponds Forge, Amy Smith won the 100m freestyle, an event she will compete in at the Olympics, while Lauren Quigley won the 50m backstroke and Rachel Lefley took gold in the 50m butterfly.