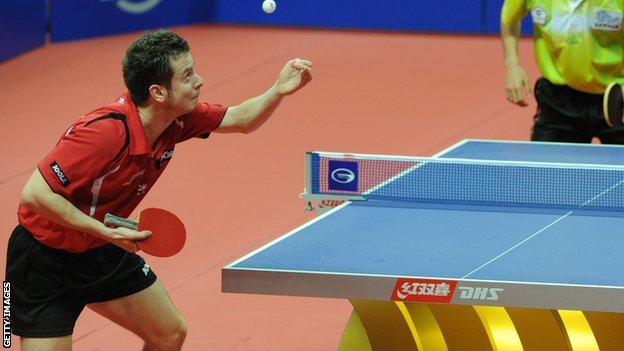 Baggaley is joined in the squad by Paul Drinkhall and Liam Pitchford.

"It's difficult because you've got the Chinese and Japanese so you have to be realistic," the Milton Keynes player told BBC Three Counties Radio.

"All of us, on our day, have beaten top players. So if we all have a great day we have a little chance of a medal."

He continued: "We're on home soil, we have the advantage of the crowd. We'd have to play out of our skins to do it, probably the best we've ever played - but it's possible.

"We're maybe like a Tottenham Hotspur. We can beat everybody, but also we can lose. We're coming up as a nation."

Britain's men, who took silver at the 2010 Commonwealth Games in Delhi, have recently returned from a three-week training camp in China, where they were able to test themselves against a range of local players.

"It makes you fast and stronger when you play against the Chinese," the 29-year-old added.

"They're so strong, the best in the world. You get to play against right-handers, left-handers, defenders, players with pimples on their rubber - all kinds of styles."

However, Baggaley, who will play for German Bundesliga club SV Pluderhausen next season, reveleaed that the team did have to make a culinary sacrifice.

"We weren't allowed to eat the beef there though because there's something in it that could come up if you're drug tested.

"We were having chicken, eggs, rice and noodles mainly. We took some tinned meats out there too," he said.

The team event is Baggaley's only chance of glory despite reaching the last 16 at an international Olympic trial in Qatar, with Drinkhall preferred for the individual event, but he insists ther are no sour grapes.

"I'm just happy to play in the team event. And I think if we've got any chance of a medal, we've got more chance in the team rather than the singles."