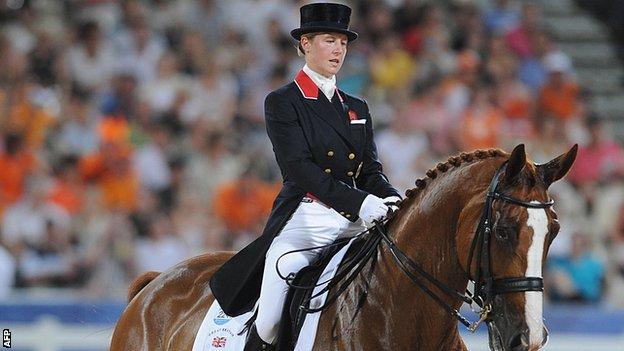 Three of the world's top five riders are included in the British Olympic dressage team for London 2012.

The British Olympic Association has confirmed that the team will comprise Laura Bechtolsheimer, Charlotte Dujardin and Carl Hester.

Richard Davison will compete in the individual dressage competition on the experienced Hiscox Artemis.

The 25-year-old scored 88.022% aboard her Olympics-bound horse Valegro in Germany.

She said: "I'm just ecstatic to make the team - it's a great honour to represent my country and such a huge achievement."

Britain has never won an Olympic dressage medal, but Team GB will arrive at Greenwich Park as reigning European team champions, although the fourth member of that quartet in Rotterdam - Emile Faurie - misses out.

Zara Phillips will make her Olympic debut at London 2012, having been selected for the five-strong eventing team.