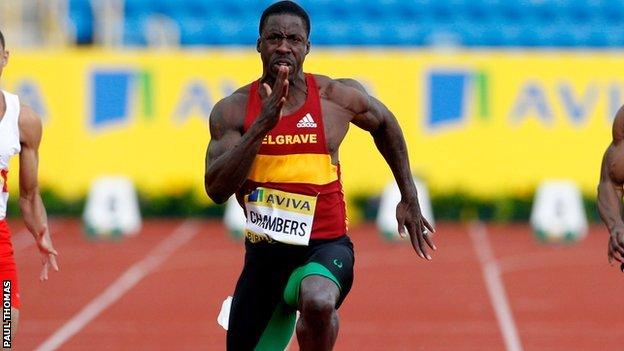 Chambers's 10.25 seconds in cold, grey conditions was enough but left him seven hundredths of a second outside the 'A' qualification time he required.

Gemili, in his first full season in the sport, has both the time and top-two finish required.

The former footballer admitted afterwards that he has yet to decide whether to compete in London.

Chambers must now secure that all-important time before the cut-off date of 1 July - possibly at next week's European Championships in Helsinki - to complete a controversial comeback after his Olympic ban was overturned two months ago.

The 34-year-old swore and screamed as he crossed the line and, after apologising for his language, admitted that he had been "scared as hell".

He said: "The heat and the semi-final went terribly and I wasn't feeling my normal self.

"I knew Adam would be really close, and I could feel him getting closer and closer. In a situation like this I have to draw on my experience and that's what enabled me to win today."

James Dasaolu, the only other man with the qualifying mark of 10.18 secs, held off Simeon Williamson to take third and will now be favourite for the final discretionary spot.

Gemili, a former Chelsea FC trainee who was a complete unknown at the start of this year, has always maintained that next month's World Junior Championships in Barcelona are his main focus.

But he now has the chance to represent his country at a home Olympics after holding his nerve in the biggest race of his life so far.

He said: "Everyone wants to go [to London] - I've run the time, I've got the spot, but I'll talk to my coach and see what happens.

"I was really nervous going into the final. These guys weren't going to take it easy on me. But until January this year I was playing football, so to be selected for the Olympics is unbelievable."

On a day when the weather affected times and distances, medal hopefuls Dai Greene, Greg Rutherford and Christine Ohuruogu all booked their places in the squad for London while Jessica Ennis - already guaranteed her slot - underlined her excellent form.

Ennis held off specialist Tiffany Porter to take the 100m hurdles in 12.92 secs having earlier won the high jump with an outdoor season's best of 1.89m.

The 26-year-old, who has the long jump and possibly the 200m to come on Sunday, said: "To know that I'm in good shape and things are moving forward is great."

World champion Greene was the class act in a tense 400m hurdles final, and it was his training partner Jack Green who secured the second automatic qualification as he came through late to push Nathan Woodward into third, with Rhys Williams falling at the penultimate flight.

"It's great to make my first Olympics," said Greene, who ran 49.48 secs to finish four tenths of a second clear of Green.

"To be honest I wanted to run a bit faster but it just wasn't there today. Maybe I was a bit complacent and went out at the speed of the guys outside of me, but I'll be in a great shape by the time the Games come round - I see the times dropping in training every week."

Ohuruogu was dominant in winning the 400m in 51.89 secs as her quest for a second Olympic title gathers pace.

After two seasons marred by injury and poor form, the 2007 world champion was five metres clear of Shana Cox, the American-born athlete who switched allegiance to Britain last year.

A smiling Ohuruogu said afterwards: "I've had a really good few months of competing and training, so I'm happy it's all coming together at the right time."

Rutherford confirmed his position as the country's best long-jumper with a dominant series topped by his third-round 8.12m, but neither second-placed JJ Jegede (7.90m) or former national record holder Chris Tomlinson in third (7.89m) have the tough 'A' standard of 8.20m.

Steve Lewis will be going to the Olympics as expected after winning the pole vault, albeit in a below-par 5.50m, with Andy Baddeley and Ross Murray joining him after taking the first two places in a slow 1500m.

But selection for the women's 800m was thrown wide open as Marilyn Okoro and Emma Jackson, the only two athletes with the 'A' standard, finished down in fifth and seventh while Lynsey Sharp held off Jemma Simpson and the impressive 17-year-old Jessica Judd to win in two minutes, 01.72 secs.

Ashleigh Nelson won a tight women's 100m in 11.50 secs from Anyika Onuora (11.51) and Montell Douglas (11.52) after favourite Abi Oyepitan - the only finalist with the required qualification mark - withdrew minutes before the gun.

Sophie Hitchon set a championship record of 69.79m in winning the hammer to confirm her Olympic place, while world indoor bronze medallist Andrew Osagie will be joined by European silver medallist Michael Rimmer, Gareth Warburton and Mukhtar Mohammed in an 800m final on Sunday that could be one of the races of the weekend.

Luke Gunn took a slow steeplechase in 8:42.20 but, with only one 'B' mark to his name, must wait to see how he and his rivals Stuart Stokes and Rob Mullett perform before the cut-off date.

The selectors can take only one athlete with the 'B' standard, but are under no obligation to take any - as Stokes found to his cost in 2008.

Gunn said: "I need another 'B' standard full-stop, hopefully at the Europeans next week. But I had to win today even if Stu had been here."