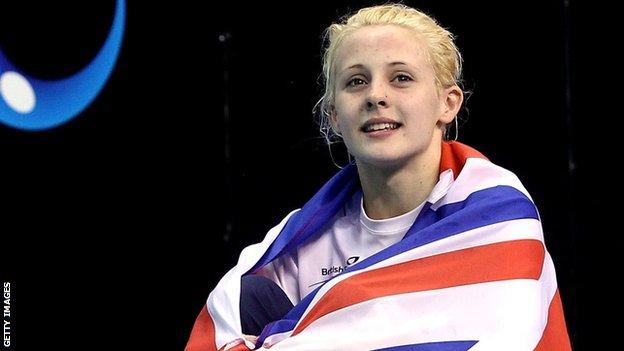 Siobhan-Marie O'Connor has become the youngest British swimmer to qualify for the London Olympics at the age of 16.

O'Connor, who had to miss her school prom to swim at the meet, won the 100m breaststroke at the ASA National Championships in Sheffield.

"I am so shocked. It is the happiest I've ever been," said the teenager.

O'Connor, from Bath, was fastest in the heats before winning in a time of 1:08.04 - an improvement of more than a second on her best before the meet.

She showed her potential by reaching the 200m individual medley semi-finals at last year's World Championships in Shanghai.

But the European junior champion missed out on qualification for Team GB in that event at the first Olympic trials in March.

"At one point I never saw myself going to London but I've given everything in training," said O'Connor.

"I've focused so much since then and now I'm going to the Olympic Games. It is just unbelievable."

Adlington, 23, was in confident mood after her victory.

"I feel like I'm in the best shape of my life and I've had the best preparation," she said. "Now I'm looking forward to London."

Proud secured her place on the team for the 200m backstroke with a dominant victory in 2:09.40 while Walker-Hebborn added the 100m backstroke to his programme after qualifying over 200m on Thursday.