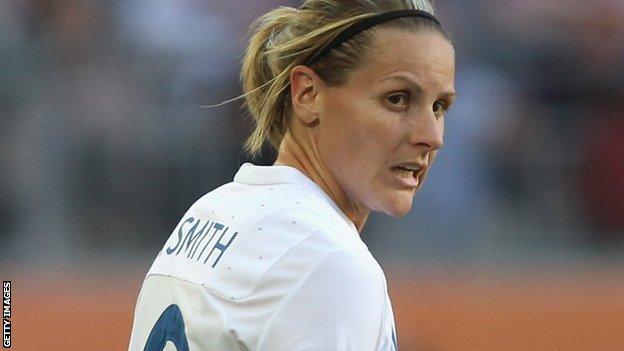 Kelly Smith has been named in the Team GB squad for London 2012 after recovering from injury.

The only non-English players selected in the squad of 18 are Scots Ifeoma Dieke and Kim Little.

"Narrowing my squad down to 18 was very, very tough because of the calibre of player we've got coming through now," said Team GB coach Hope Powell.

"This is a great chance for these players to be involved in something huge and it gives us a great platform to further raise the profile of the women's game."

Powell, who has managed England since 1998, says she based her selections for the Team GB squad purely on merit.

"I didn't feel any pressure to include players from Northern Ireland or Wales," she said.

"I was tasked with picking the best squad of players and that's what I've done. We had everyone looked at extensively.

"I took the associations out of the equation and it was just about trying to pick a squad of players that I felt would do the best job possible."

Everton and England goalkeeper Rachel Brown told BBC Radio Lancashire that being selected to represent Team GB at London 2012 is "the pinnacle" of her career.

"It's something that, a few years ago, we didn't think the opportunity would ever arise," said Brown, who has appeared in both the World Cup and European Championships for England.

"It's only really been in the few months since it's been confirmed that you start thinking about how much it would mean to you (to be selected).

Brown's Everton team mate Jill Scott says that Team GB have a tough task on their hands when they face Brazil in their final Group E game.

"Brazil are one of the best teams in the women's game, they have the best player in the world in Marta, who a couple of the girls have played against in America. It's going to be a very difficult game."

London 2012 will be the first time that Great Britain has competed in the Olympic women's football tournament, and their opening match against New Zealand at Cardiff's Millennium Stadium on 25 July takes place two days before the opening ceremony.