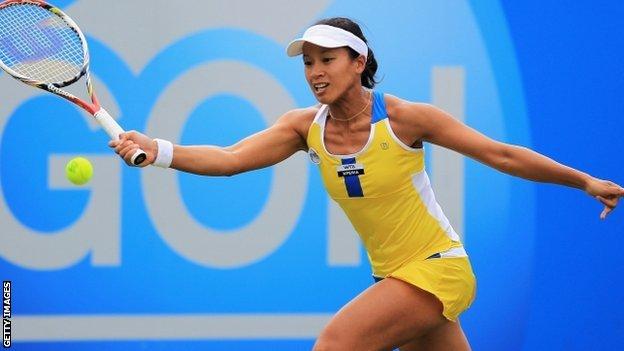 Great Britain will have eight players at the Olympic tennis tournament after wildcards were given to the nation's top four women.

Anne Keothavong and Elena Baltacha will play in the singles, while Laura Robson and Heather Watson team up for doubles.

Andy Murray was the only man to qualify for singles, and will play in the doubles with his brother Jamie, along with Colin Fleming and Ross Hutchins.

I am so happy to be playing the Olympics with Laura

The mixed doubles selections will be made at the start of the tournament.

"I'm so proud that I'll be representing Great Britain at the Olympics this year."

Baltacha added: "I found out today I'm going to be an Olympian, I can't explain how much that means to me."

Watson said: "I am so happy to be playing the Olympics with Laura. When I heard the news I was so pleased and I think we can do very well together. We both enjoy rising to big occasions and it's so amazing to be part of something so big and in our home country."

And Robson added: "I am hugely honoured and very excited to be representing the UK in the London Olympic Games. From the moment the announcement was made regarding London winning the Olympic bid, it was my dream to be part of Team GB."

Wimbledon will host the tennis event, three weeks after the end of the annual Championships at the All England Club, with Rafael Nadal defending his men's singles title and Roger Federer and Stanislas Wawrinka going for gold once again in the doubles.

Defending women's champion Elena Dementieva has retired since Beijing, with Maria Sharapova, Victoria Azarenka, Serena and Venus Williams likely to be among the challengers for the title.