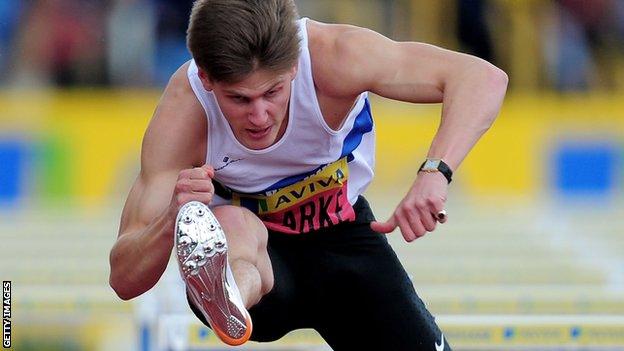 Clarke, 22, made the squad by finishing second in the 110m hurdles behind training partner Andrew Pozzi.

"I was very disappointed to have lost, but I was obviously ecstatic to have made the team," Clarke told BBC Oxford.

To think that I will be on that start line in front of 80,000 people in the stadium and a billion on TV is pretty crazy

"It's like being hit in the kidneys at the same time as winning the lottery. It was quite difficult to deal with."

The magnitude of what lies before him is still sinking in but Clarke is turning his attention to his first race at the Games on 7 August and is expecting the atmosphere at the Olympic Stadium in Stratford to be truly special.

"The race at the Olympic trials was so tight - some of my idols were in the race, people that have been winning international medals for years now," he said.

"To think that I will be on that start line in front of 80,000 people in the stadium and a billion on TV is pretty crazy.

"I was born in London but have lived in Oxfordshire for most of my life now and there was a big contingent from Oxford in the crowd - and that was just 15,000 on Sunday.

"What it's going to be like when there are 80,000 people in the Olympic Stadium is something I can't comprehend and hopefully it will psyche out the opposition.

He added: "Everyone has asked me to get tickets, but it's so tough. Luckily, most of my family have got tickets for the first round and hopefully I can make it past that."