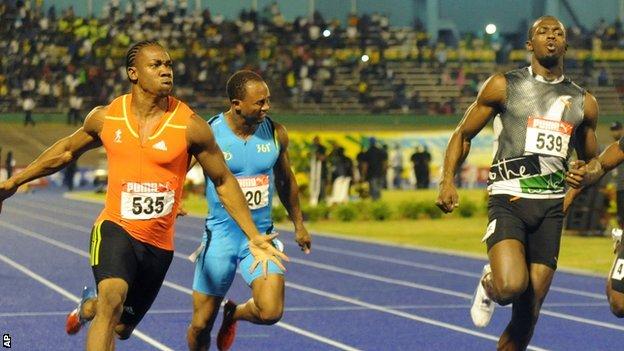 Usain Bolt suffered a major upset in the 100m final at the Jamaican Olympic trials as world champion Yohan Blake won in a time of 9.75 seconds.

Blake's time - the fastest in the world this year - was a new personal best and makes him the fourth fastest man of all time.

We were expecting something special but this was truly something else. Yohan Blake's electric 9.75 left Jamaica in a state of shock.

Blake describes himself as "The Beast" and he tucked into the 100m final like he hadn't eaten for days.

Usain Bolt was supposed to win this one. It would be his statement of intent to tear up London 2012. But he just didn't look himself. Before both the semi and final there was no joking, smiling or fooling about. We assumed it suggested a real focus. But on reflection something wasn't right.

Asafa Powell will complete Jamaica's big three going into the London Olympics. He had flown to Florida for treatment on the morning of the race and, soon after he crossed the line in the final, he collapsed and had to be helped off the track for medical attention.

The result sees all three men qualify for the London 2012 Olympics.

Blake's time means the only faster men in the world are Bolt, who holds the world record of 9.58, American Tyson Gay, who has run 9.69, and Powell, whose quickest time is 9.72.

"No pressure at all... everything is good. I'm just fortunate," Blake said after beating his personal best of 9.82. "I'm the national champion of Jamaica now, I go into the Olympics like this."

Bolt was slow out of the blocks in both the final and semi-final and said afterwards of his start: "I had to ignore it. I had trouble getting out, but I kept feeling like I could not give up."

It was the first time Bolt and Blake had faced each other since Blake took the world title in Daegu last year, after the Olympic champion was disqualified for a false start.

Powell tweeted: "Tore my groin on the first round of the trials. Your strength and prayers willed me through the pain and on to the London Olympics."

In the semi-finals, it was Powell who clocked the fastest time of 9.92 seconds, with Blake third in the same race, behind Nesta Carter.

After a slow start Bolt eventually took the lead midway through his semi-final and won in 10.01, nosing out Michael Frater on 10.02.

Nearly 400 Jamaican athletes have been competing for about 60 berths in London in what could be the largest athletics delegation ever sent to an Olympics by the Caribbean nation.