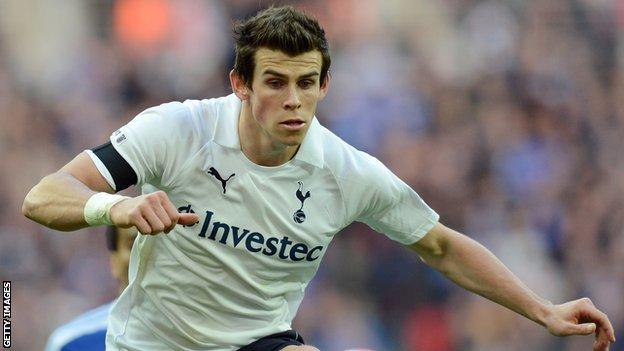 Tottenham winger Gareth Bale will not be available to play for Team GB's football side at the Olympics after aggravating a back injury in training.

Bale, 22, was set to be named in manager Stuart Pearce's 18-man squad that is being announced on Monday.

The Welshman was due to be one of the star names in the squad, but following medical advice was forced to withdraw.

It is the latest blow to the profile of the team after David Beckham revealed he had missed out on selection.

Beckham was expected to be one of the three over-23 players named in the squad, but former Manchester United team-mate Ryan Giggs is thought to have been named, as well as Liverpool's Craig Bellamy and Manchester City defender Micah Richards.

Former England captain Beckham had made Pearce's shortlist of 35 players but was overlooked for the final squad and admitted to being "very disappointed" at missing out.

Bale signed a new four-year contract with Tottenham on Wednesday but now faces a race against time to be fit for their season opener against Newcastle United on 12 August.

He had been a firm supporter of Team GB's participation in the tournament despite opposition from the Football Association of Wales (FAW).

In May 2011, he declared his interest in playing for Pearce's side and in October of the same year was pictured wearing the Team GB London 2012 football supporters' shirt.

"I think it would be a great experience.

"You see it with the British and Irish Lions in the rugby, they come together as a unit and play against other countries. It's great and there's no reason why that can't happen with the football.

"At the moment Wales haven't qualified for a major tournament in I don't know how many years so it would be nice to play in one against the best countries in the world."

The FAW, along with the Scottish and Northern Irish associations, fear Team GB could threaten their independence. However, they have said they will not stop their players from taking part in the tournament.

Meanwhile, Manchester United veteran and former Wales international Giggs is excited about participating in the Games.

"I have always been at United so I am getting a chance so late in my career to play with others who I would not otherwise have had the chance to do so."

Giggs, United's all-time record appearance holder, added that he was disappointed that he would not get the chance to play alongside former Old Trafford team-mate Beckham.

"As a friend of David's I am disappointed for him," he added. "I think people thought he would be in it but he has not quite made that final 18."