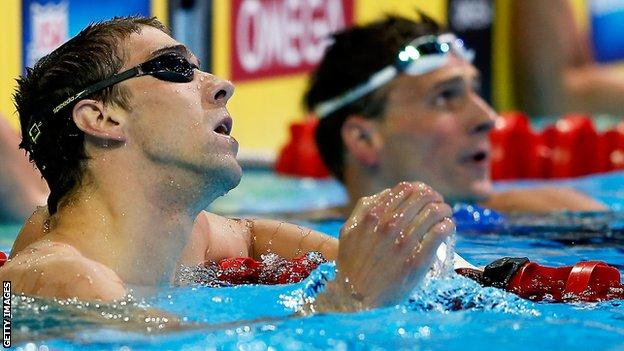 Michael Phelps beat rival Ryan Lochte by 0.09 seconds in the 200m individual medley final at the US Olympic trials.

Olympic champion Phelps celebrated his 27th birthday by winning their penultimate meeting before London 2012 in a time of one minute 54.84 seconds.

Jessica Hardy won the race in 53.96secs, 0.19 ahead of Franklin who has already qualified for the 200m freestyle and 100m backstroke events in London.

And she could yet add more events to her Olympic schedule after topping the times in the semi-finals of the 200m backstroke.

Phelps, whose victory in the 200m individual medley final was the fastest time in the world this year, said: "It feels good to be back on that (winning) side.

"But I'm sure that's not going to be the end of us going back and forth. It doesn't really matter what happens here, the bigger races are a couple of weeks down the road."

Phelps won eight gold medals at the Beijing Olympics and 14 in total, plus two bronze.

Lochte said: "I know this meet was just stepping stones for what I really want to do in London."

Natalie Coughlin's hopes of ending an illustrious Olympic career with an individual race ended with a sixth-placed finish in the 100m freestyle.

Coughlin, winner of the 100m backstroke at the past two Games, failed to qualify in that event or the 100m butterfly, but she likely will go to London as a potential relay swimmer with a chance to add to her 11 Olympic medals.

Beijing gold medallist Rebecca Soni won the 200m breaststroke in 2:21.13, improving on her own world-leading time of the season.