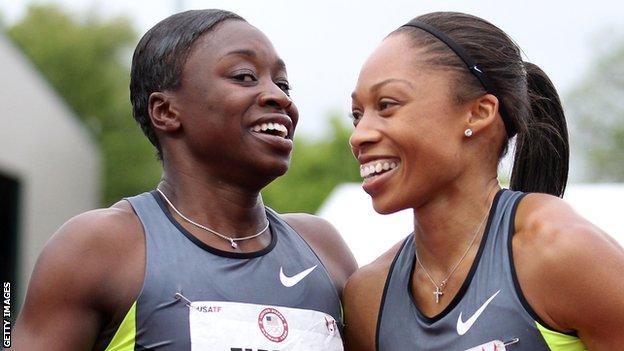 Allyson Felix took the final women's 100m spot on the US Olympic squad after her rival Jeneba Tarmoh pulled out of their scheduled run-off.

Felix, 26, ran a dead heat for third place with Tarmoh at the United States Olympic trials on 24 June.

USA Track and Field asked the pair to race again on Monday to decide the final sprint spot.

But Tarmoh wrote to USATF president and chairman Stephanie Hightower announcing that she was standing down.

An statement released by Tarmoh's agent Kimberley Holland read: "I have decided to decline my third place position in the 100m dash to Allyson Felix.

"I understand that with this decision I am no longer running the 100m dash in the Olympic Games and will be an alternate for the event."

Shelley-Ann Fraser-Pryce's time of 10.70 seconds at the Jamaican Olympic trials was comfortably quicker than Carmelita Jeter's winning time of 10.92 seconds in the United States Olympic trials.

"We are disappointed that Jeneba has changed her mind regarding her position on the Olympic team," Hightower said. "We all worked hard to reach a consensus on the tie-breaker."

"I wanted to earn my spot on this team and not have it conceded to me so I share in everyone's disappointment that this run-off will not happen," said Felix in a statement.

Tarmoh could still be considered for the US 4x100m relay squad and could make it to London if another athlete withdraws.

She had originally been declared third by one-thousandth of a second in the women's 100m final with a time of 11.07 seconds - her personal best at that distance.

But officials consulted camera replays and changed the result to a dead heat, leaving uncertainty as to who will join Carmelita Jeter and Tianna Madison in the 100m at the Olympics. The decisive race will take place on Tuesday at 01:00 BST.

With a time of 11.07 seconds, both Felix and Tarmoh are some way behind current Olympic champion Shelly-Ann Fraser-Pryce, who recorded 10.70 seconds at the Jamaican Olympic trials.

Felix will definitely participate in the women's 200m at London 2012 after running a time of 21.96 seconds, but Tarmoh will miss out after finishing fifth and is so far only in the relay squad.