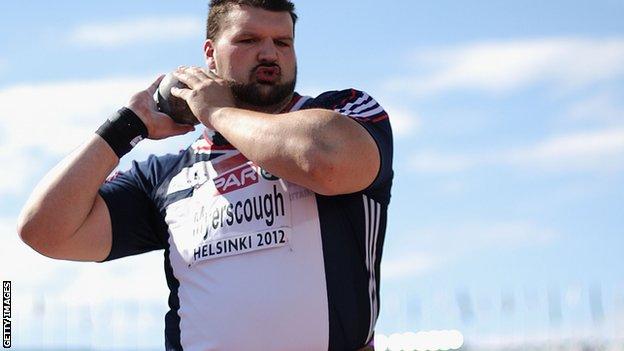 Carl Myerscough's Olympic hopes were in tatters after he failed to qualify for the European Championships shot put final and a rival beat his discus throw.

But his research uncovered a little-known athletics meeting in Estonia, 50 miles from Team GB's base in Helsinki.

He boarded a ferry, competed in the event on Sunday and his 20.13m throw surpassed the Olympic 'B' standard.

Last Wednesday, Myerscough - the British record holder in the event - failed to qualify for the shot final at the European Championships in Finland.

Then on Saturday he heard one of his rivals for a place on the British team in the discus - Abdul Buhari - had achieved the 'A' qualifying standard with a throw of 65.24m back in Barnet, pushing him out of the reckoning.

That would have left the 32-year-old Lancastrian - nicknamed the Blackpool Tower - without a place at London 2012.

"Myerscough was sitting in the stands, heard that Buhari threw the standard in London which means he would probably not be selected for the discus, and decided to look on the web," Van Commenee said.

"He found a competition in Estonia, jumped on the boat late on Saturday night to Tallinn, threw the distance and returned back here to jump on the plane home on Monday."

Born in Blackpool but now based in the United States, Myerscough had achieved the 'B' standard distance of 20m in the shot earlier this year, but needed to reach it for a second time to qualify for London.

He will find out on Tuesday whether he has made the team.

Myerscough had been banned from the Olympics since he tested positive for anabolic steroids in 1999, but is he now free to compete at London 2012 after the British Olympic Association's lifetime ban on athletes who had tested positive was overturned by the Court of Arbitration for Sport.