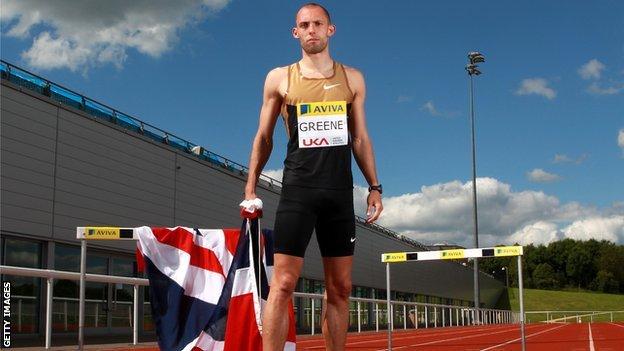 Triple Olympic champion Usain Bolt suffered a major upset when he was beaten by Yohan Blake in both the 100m and 200m at the Jamaican trials.

All three have qualified for London 2012 but Bolt has much to do if he is to retain the 100m Olympic title he won so spectacularly four years ago in a time of 9.69.

I am very disappointed, but there will be no bigger supporter of the team than me

David Beckham has not been selected for the Great Britain Olympic football squad.

Gareth Bale is ruled out with injury but Giggs' team-mate Tom Cleverley is one of several highly rated Premier League youngsters in the squad.

Williams held off Serbia's Emir Bekric to win in 49.33 seconds, and is now set to join Dai Greene and Jack Green in London.

There were three golds in all for GB, with Mo Farah retaining his 5,000m title in impressive fashion.

But there was disappointment for the women's 4x100m relay team; they were disqualified in their semi-final and have missed out on an Olympic place.

Michael Phelps is set to defend all eight of his Olympic titles after a tremendous week at the US trials.

The 14-time Olympic champion was under pressure from Ryan Lochte, who won five gold medals at last year's World Championships.

But Phelps - who turned 27 last week - won their personal duel by three events to one in Nebraska.

Piggy French has been ruled out of the Olympics following an injury to her horse DHI Topper W.

It is a big blow for Team GB, with 31-year-old French winning the Olympic test event on Topper last year.

"It's horrific and fabulous at the same time," Wilson said. "I'm devastated for Piggy and wouldn't wish this on anybody."

NBA star Ben Gordon will no longer be considered for Team GB's basketball squad after he failed to report to the training camp by the 30 June deadline.

The Charlotte Bobcats guard was named in the provisional squad in April and head coach Chris Finch had been hopeful of including him in the final cut.

The news came at the end of a poor week for the Great Britain team, who lost all five of their warm-up games in Texas.

British number one beach volleyball duo Zara Dampney and Shauna Mullin have been selected for the London Olympics.

The pair have competed together since 2009 and have been allocated GB's host nation spot for the event.

They are ranked 37th in the world and finished second at the Continental Cup tournament in Ukraine last June.

It is the first time a British pair have featured in an Olympic tournament since the event made its debut at the 1996 Games in Atlanta.

The BBC has unveiled the title sequence and marketing campaign for the London 2012 Olympic Games.

A 60-second trail was broadcast during half-time in the Euro 2012 final.

Based on a "Stadium UK" concept, the animation will be seen on television coverage and used on computers, mobiles, tablets and connected TV.

The track, First Steps by Elbow, will be available as a digital-only download from 27 July with all profits going to BBC Children in Need and Sport Relief.