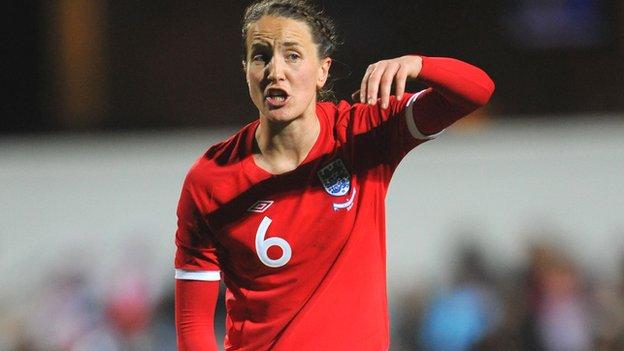 Lincoln Ladies defender Casey Stoney says being made captain for the Team GB squad for London 2012 would be the "pinnacle of her career".

The England skipper was last week named in the squad but boss Hope Powell has yet to reveal who will lead the side.

"I am not getting my hopes up," Stoney, 30, told BBC Lincolnshire. "But I would love to be captain.

"It would be an honour. It would probably be the pinnacle of my career leading the team out in the Olympics."

She added: "I do it as England captain and it is an absolutely amazing feeling to lead your team out.

"If I get it, brilliant. If I don't, it won't change me as a player and I will still do the same thing. I will still be a leader on the pitch and I will enjoy every minute of it."

London 2012 will be the first time that Great Britain has competed in the Olympic women's football tournament, with their first match against New Zealand at Cardiff's Millennium Stadium on 25 July taking place two days before the opening ceremony.