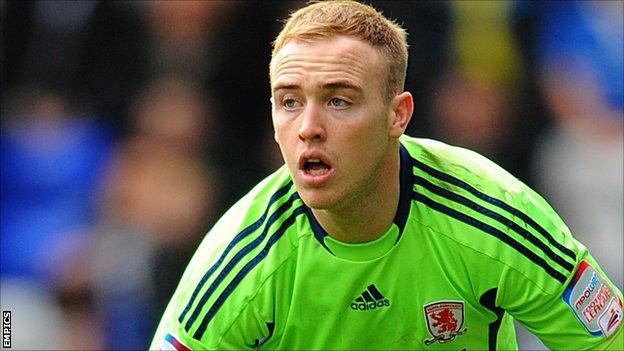 Butland is the likely favourite after his senior England squad call-up to this summer's European Championship following John Ruddy's withdrawal.

"Common sense would say he'd be picked ahead of me," Steele told BBC Tees.

"I've got to make sure at training and in warm-ups I show what I can do and get in ahead of him."

"My focus is purely on performing well for Middlesbrough and doing well, and thankfully I've been picked in the Team GB squad."

Steele, 21, could make a Team GB debut amid familiar surroundings with the Riverside Stadium hosting a friendly against Brazil on 20 July in the build-up to the Olympics.

"You've imagined it and dreamed about it because it's something you want," Steele added.

"Whether I play or not it's going to be a special occasion for Middlesbrough Football Club.

"I hope the town and people can pull together, get a full house and hopefully it will put us back on the map."

The Team GB players will head to Spain for a training camp under the guidance of manager Stuart Pearce before the Brazil friendly, the first time the squad will have assembled since the announcement last week.

"It's not really sunk in yet, but once we meet up and I put the tracksuit on it might do," Steele added.

"Once the tournament is over, it might hit me, I might realise what we've been doing, what we've achieved.

"If we get a medal it will obviously be even better."

Listen to the full interview with Jason Steele with BBC Tees Sport on the iPlayer for seven days from Tuesday, 3 July.