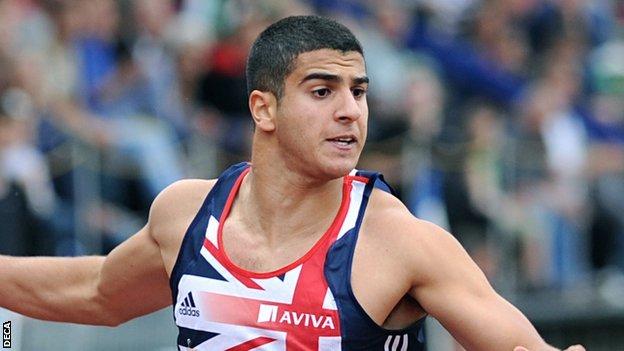 Dartford sprinter Adam Gemili says he is fully focused on the World Junior Championships, describing his Olympic selection as "a bonus".

"The World Juniors has always been my main focus," he told BBC Sport. "The Olympics is just a bonus.

"I've extended my training to keep myself fit enough to go to the World Juniors. I will not overlook that."

Gemili burst onto the scene in Germany in May by clocking 10.08 seconds, achieving the Olympic 'A' standard in the process and becoming the second fastest man in Europe in 2012.

He confirmed his place in Team GB by finishing runner-up to Dwain Chambers at the Olympic trials in Birmingham in June.

Despite the possibility of lining up alongside Usain Bolt and Yohann Blake in Stratford in August, Gemili still believes he will be fully tested by the sport's young sprinters in Spain.

"I'm not going to underestimate my competition. Everyone in the world is running quick and I'm just going to do the best I can," he said.

"It's my race to run. It's my lane. I'm going to keep myself to myself and run how I know I can run."

The former Chelsea trainee's rise to the top of the British rankings is all the more startling given that he only started full-time sprint training in January.

With his relative inexperience Gemili feels that he has plenty of improvement to come, but refused to be drawn on how he might fair at London 2012.

"I've been running with a better technique and learning how to execute a race properly," he said.

"Hopefully there are a lot more improvements to be made and you'll see the times get quicker and quicker.

"[In London] I just want to take each round as it comes. I want to go there and do as well as I can and execute a race that I'm happy with. If I do that, the times will come.

"I'm not really targeting anything," he concluded. "Everyone wants to make the final but there's only eight spaces."