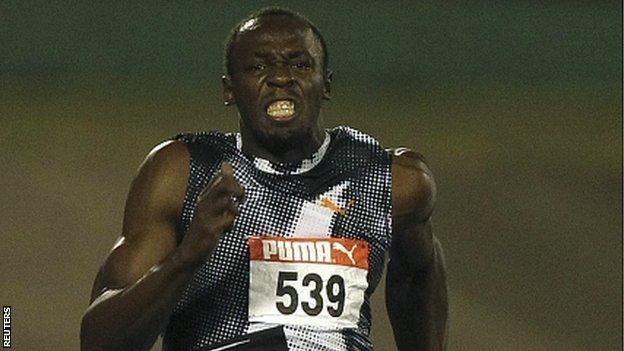 The Jamaican surged to victory in world record times in the 100m and 200m at the Beijing Olympics four years ago.

He tells BBC Radio 5 liveSport's London Calling on Thursday: "The World Championships is important but the Olympics is the pinnacle."

The programme includes Jamaica's Olympic trials, where Bolt was beaten into second in both the 100m and 200m.

Bolt adds: "Growing up all you think about is the Olympics. Even in basketball, they always want to win an Olympic gold."

He lost his 100m World title to compatriot Yohan Blake in Daegu last year after being disqualified for a false start.

His preparations for this year's London Olympics, which begin on 27 July, continued with another defeat at the hands of Blake, who ran 9.75 seconds to win the 100m at the Jamaican trials, with Bolt second in 9.86 and former world record holder Asafa Powell third in 9.88.

Speaking before his two defeats at the trials, Bolt said: "I have done pretty much everything but I've never really repeated a feat in the same Championship. I missed out at the Worlds because it was a hard season, so the Olympics will be the opportunity.

Asked about the dominance of Jamaican, sprinting the 25-year-old added: "The country is really happy to see all the athletes training there, they can shake our hands, take pictures, so it's wonderful for the country.

"It's a great feeling people want to be like you because when you're growing up you want to be like someone else. So I know how it feels and it gives you that warmth inside to continue working hard and to set a great example for the kids.

"It's going to be good for Jamaica if we can set a trend because this year is our 50th anniversary so it would be a great birthday present.