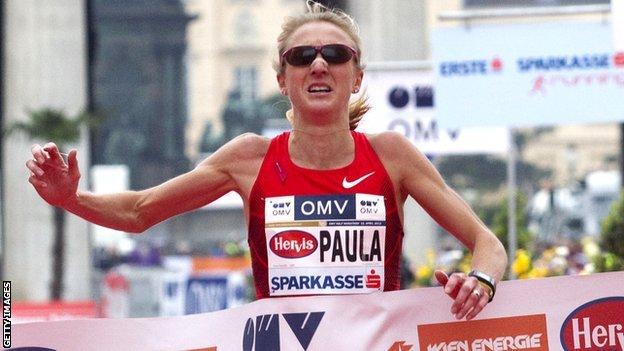 Britain's Paula Radcliffe says an injury scare has left her in "a bit of a panic", but she is confident of being fit for the London Olympics.

The marathon runner will see a sports injury specialist in Germany about her left foot, which has hampered her in training.

Painkilling injections have also had little affect on the 38-year-old.

"I've got time for it to get sorted out," she said. "Everybody has these niggles coming in."

The women's world record holder had surgery in 2009 in an effort to resolve her foot problem. However, the issue has flared up again.

"Training has gone really well through May and June," she said. "Up until now, I've been really pleased with how things are going.

"My old osteoarthritic foot has just decided to flare up this week which has given me a bit of a panic, but I'm trying to stay calm and stay on top of that.

"I've been getting treatment all the time on it and I am going straight away from here to get more treatment on it now."

Radcliffe, who was speaking at the launch of Priority Sports, a partnership between Nike and O2, has battled for form and fitness in the build-up to London 2012.

Last September, hitting the Olympic qualifying mark with a time of two hours 23 minutes and 46 seconds.

However, in April her was two minutes slower than any of her previous attempts.

That prompted lifelong friend and fellow distance runner Liz Yelling to comment that Radcliffe will not race in London if she is not 100% fit.

However, she has never won an Olympic medal.

She failed to finish both the marathon and 10,000m at the Athens Games in 2004. Then, following an injury to her left leg, she finished the marathon down in 23rd place at the Beijing Olympics in 2008.