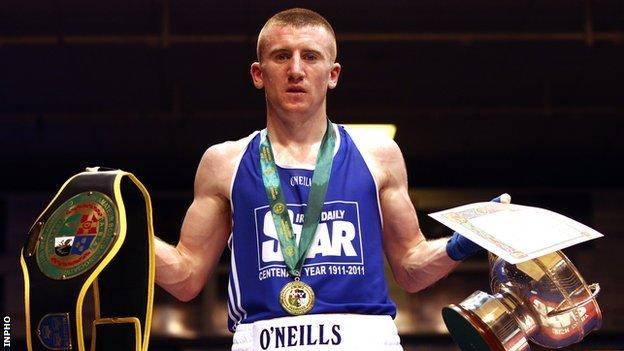 Belfast Olympics medal prospect Paddy Barnes believes he may not be seeded for the London Games after falling out of the world rankings.

The Beijing bronze medallist was ranked sixth in the light-flyweight division in June but, one month later, is no longer in the 33 who are ranked.

The seeding arrangements for the Games are to be announced on 27 July.

If Barnes is not seeded, it raises the possibility of him being drawn against the world number one in his first contest.

After being beaten by Mark Barriga of the Philippines at the World Amateur Championships in Azerbaijan last year, Barnes had to secure his London 2012 place through a qualifying tournament in Turkey in April.

The rankings cover a two-year period, which means his win at the European Championship in Moscow no longer count.

Barnes described the latest rankings as unfair and said he would be raising the matter again.

"I have gone from sixth to not be ranked at all in the world. It is a joke if you ask me," the 25-year-old told the Irish Times.

"There have been no tournaments this year that you can get ranked from."

The top boxer in Barnes's 46-49kg weight division is Shin Jong-Hun of South Korea who won silver at the 2011 World Championships in Baku.