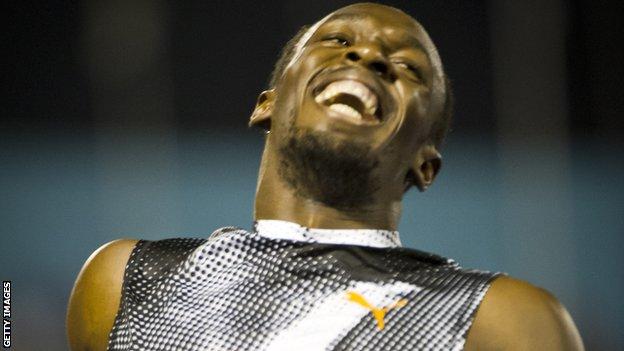 Usain Bolt has withdrawn from his final race before London 2012 after suffering a "slight" injury problem.

But the three-times Olympic gold medallist has withdrawn so he can undergo treatment.

His coach, Glen Mills, said he wanted to "give him sufficient time for treatment and time to train and prepare for the Olympic Games."

Despite the withdrawal, Bolt said he would be in London to defend his three Olympic titles, which also includes the 100m and the 4 x 100m relay gold he won in Beijing four years ago.

The world record-holder had his right hamstring stretched out on the track after finishing second to Yohan Blake in the 200m at the Jamaican Olympic trials last weekend.

He was also beaten by world champion Blake, who won in a time of 9.75 seconds, in the 100m in Kingston.

Blake's time was the fourth fastest in history.

The only people faster in the world are Bolt, who holds the world record of 9.58, American Tyson Gay, who has run 9.69, and Asafa Powell, whose quickest time is 9.72.

"I am happy to have earned my spot on the Jamaican Olympic team despite the challenge," said Bolt, who ran 9.76 in Italy in May.

"I want to congratulate my fellow Racers Track Club Members along with the other athletes who made the team. I thank everyone for their support."