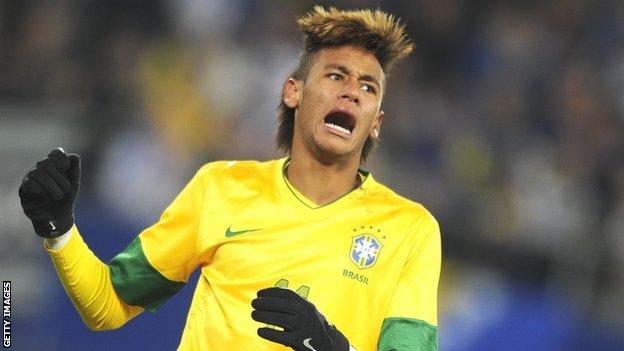 Brazil have included forwards Hulk, Neymar and Alexandre Pato in a strong squad for this summer's Olympic Games.

Santos' Neymar has nine goals in 18 games for the senior team, while AC Milan's Pato and Porto's Hulk have also impressed for the full side.

Hulk is one of three over-aged players along with defenders Marcelo (Real Madrid) and Thiago Silva (AC Milan).

Hulk, 25, has scored three goals for the senior side since making his full debut in 2009 and the coach said he hoped the Porto player's experience would help his side.

"He brings a lot of strength to the team," said Menezes. "His experience will be important in big matches, as well as his great ability to be decisive."

Menezes has also selected several promising young stars such as Santos midfielder Paulo Henrique Ganso, striker Leandro Damiao and midfielder Oscar (both Internacional) and Sao Paulo midfielder Lucas, all of whom have senior caps to their name.

Brazil, who are aiming to win their first Olympic football title, have been drawn in Group C along with Egypt, Belarus and New Zealand.

But before that they will play a warm-up friendly against Stuart Pearce's Team GB side at Middlesbrough's Riverside Stadium on 20 July.