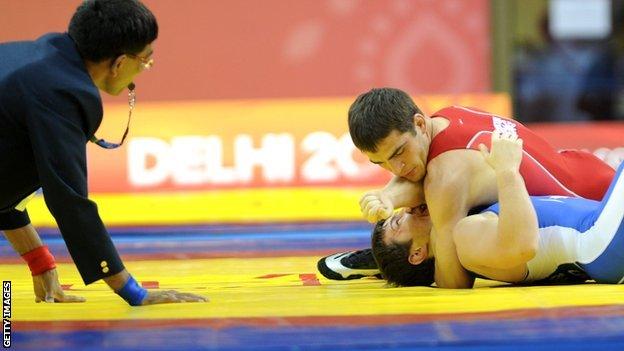 British Greco-Roman wrestler Myroslav Dykun has been given a two-year ban after a failed drugs test.

He tested positive for banned recreational drug methamphetamine at the British Senior Championships on 24 March and was provisionally suspended from all competition on 30 April.

The 29-year-old won Commonwealth gold for England in 2010.

Dykun will lose the British -74kg greco-roman title he won in March, but none of his other competitive results are being investigated.

It is another setback to the sport which had its allocation of host-nation berths reduced to one in May, leaving Olga Butkevych as their only competitor.

UK Anti-Doping chief executive Andy Parkinson said: "Our pre-Games prevention programme was put in place to ensure that only clean athletes represent Great Britain and this case proves that the system is working.

"British Wrestling is keen to point out that it has a zero-tolerance policy towards drug taking and was aware that this judgement was likely after provisionally suspending Dykun in April.

"However, at the time the sport stressed its belief that Dykun was guilty of taking a recreational, rather than performance enhancing, drug: what UK Anti-Doping's verdict and legislation shows is that methamphetamine does carry properties which could lead to improving results.

"The 29-year-old will lose the GB title he won earlier this year and any funding he receives as a British Wrestling athlete, but the Commonwealth gold medal he won at Delhi 2010 is safe and with his ban due to end in April 2014, he could potentially bid to defend that crown at the next Commonwealth Games in Glasgow."

"When the eyes of the world fall on London later this month, we want the public to have confidence in clean sport and understand that doping of any kind will not be tolerated."

"The situation is extremely disappointing for the sport.

"We believe it [the sample] tested positive for amphetamines, which we see as recreational - not performance enhancing in the sport of wrestling.

"Under no circumstance can British Wrestling condone drugs in sport whether performance enhancing or recreational.

"British Wrestling will not tolerate such behaviour from anyone and we are supporting the drug-testing programme.

"The fact we've got in effect an athlete caught is evidence we are determined to work in partnership to route out anyone misusing substances."

Dykun, who married a former British wrestler, attained British citizenship more than five years ago as a result of length of residency in the country.

Dykun is one of a number of Eastern European wrestlers who were brought to Britain to help develop a world-class academy in Manchester.

In 2007, Yana Stadnik and Olga Butkevych joined the set-up as sparring partners.

However, last year several British wrestlers alleged that roles had been reversed and GB athletes were now acting as training partners to their foreign counterparts who were eligible to compete for Britain.

Britain's last Olympic medal in the sport was in 1984 when Londoner Noel Loban won bronze in Los Angeles.