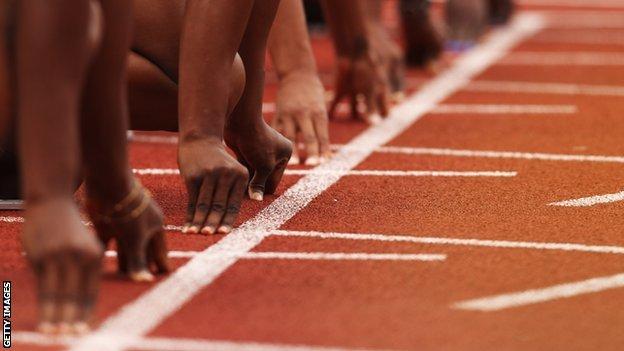 Roger Federer won his seventh Wimbledon crown with a 4-6 7-5 6-3 6-4 wn against Andy Murray, the first British man to reach the final for 74 years.

It was a remarkable 17th Grand Slam title for the Swiss star, who will be back at Wimbledon for the Olympic tournament, which starts on 28 July.

The Williams sisters will team-up again at the Olympics to defend their doubles title.

Tyson Gay recovered from a poor start to pip fellow American Justin Gatlin and win the Diamond League 100m in Paris in 9.99 seconds.

Gay, beaten by Gatlin at the recent US Olympic trials, came through powerfully ahead of Gatlin, who clocked 10.03, and Frenchman Christophe Lemaitre in 10.08.

There was an encouraging run from world champion Dai Greene in the 400m hurdles; he set a new personal best of 47.84 seconds to take silver behind Javier Culson.

It's a tremendous honour to be captain

Manchester United midfielder Ryan Giggs has been named as Great Britain captain for the Olympics.

Coach Stuart Pearce said a number of players were capable of the role, but Giggs was the "standout captain" in his 18-man London 2012 squad.

"He's got the respect of all the members of the group," said Pearce, whose side face Senegal at Old Trafford in their opening game on 26 July.

Britain's Emma Pooley warmed up for the Olympics by finishing runner-up in the women's Giro d'Italia - the Giro Donne - for the second year in a row.

Pooley, who will ride the time trial and the road race in London, also topped the mountains classification.

Dutch rider Marianne Vos took overall victory for a second straight year to confirm her as favourite going into the Olympics.

Nicole Cooke - the only British rider to have won the prestigious Italian race, in 2004 - came 44th, over an hour adrift of Vos.

Charlotte Dujardin showed she is a contender for dressage gold at the Olympics with a sensational performance at the Hartpury International in Gloucestershire.

The 25-year-old became the first British rider to break the 90% barrier for a freestyle routine in international competition as she scored a runaway victory.

Performing her Olympic freestyle to music routine on her horse Valegro, composed especially for her by Tom Hunt, she was awarded 90.65%.

That broke the previous British record held by Laura Bechtolsheimer, who is also competing at London 2012.

Great Britain's men were given a harsh reminder of the task they face at the Olympics after losing all four matches at the Dublin Cup.

The Olympic warm-up tournament featured several of GB's Olympic opponents, including world and Olympic champions Hungary, who beat GB 13-8 in the opening game.

That was an encouraging start for Britain against a team who are going for a fourth consecutive Olympic gold in London.

But three more defeats followed, including a 17-7 loss to Romania, who they play in their opening match at the Olympics on 29 July.

The Dublin Cup was won by Croatia.

Nigeria will make their Olympic basketball debut in London after their men beat the Dominican Republic 88-73 in a decisive qualifier on Sunday.

Having arrived in Venezuela as complete underdogs in the 12-team tournament offering three London berths, Nigeria joined Russia and Lithuania in clinching an Olympic place.

Nigeria's forward Derrick Obasohan said: "We had the toughest schedule in the tournament but nothing was going to stop us because we were on a mission."

In London, they will face favourites USA among others in Group A, while Russia will begin their Olympic campaign against hosts Britain in Group B.