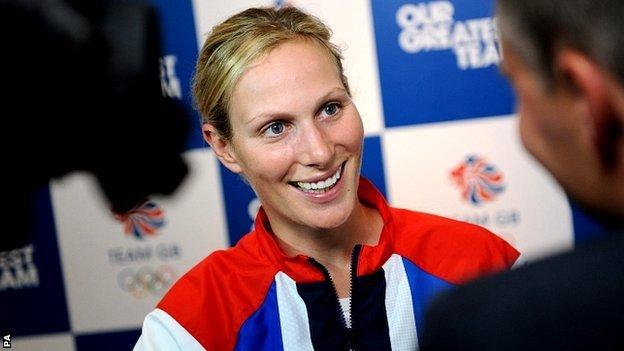 With London 2012 only two weeks away, Zara Phillips is hoping to avoid the misfortune which has ruled her out of the past two Games.

The Briton, 31, will ride High Kingdom on her Olympic eventing debut, having missed Athens and Beijing because of injuries to previous horse Toytown.

"You want to stop anything from happening but still try to get to a peak performance level," she said.

"But animals do stupid things, it's part of the sport unfortunately."

The 2006 BBC Sports Personality of the Year winner qualified for the Team GB eventing squad as a result of finishing third in Bramham Horse Trials in June.

Eventing comprises dressage, cross country and show jumping. Phillips says that High Kingdom is not as competent in the dressage as in the other disciplines, but is improving.

"I've had High Kingdom for a long time - he's a very different character to Toytown," added Phillips, whose mother Princess Anne competed at the 1976 Olympics and father Captain Mark Phillips won gold in the 1972 team event.

"Every time you get a horse you need to build up a relationship. He's getting better and better in dressage - that's his weakest phase. Hopefully, he's going to improve in the next couple of weeks."

Fox-Pitt, who will ride Lionheart and currently leads the world eventing rankings, believes that team gold "isn't out of reach".

"We're a good and exciting team," said the 43-year-old from Dorset, who won Olympic team silver in 2004.

"Gold is not in front of our noses, but it's not out of reach. This time we've got quite a good chance and maybe things will go our way."