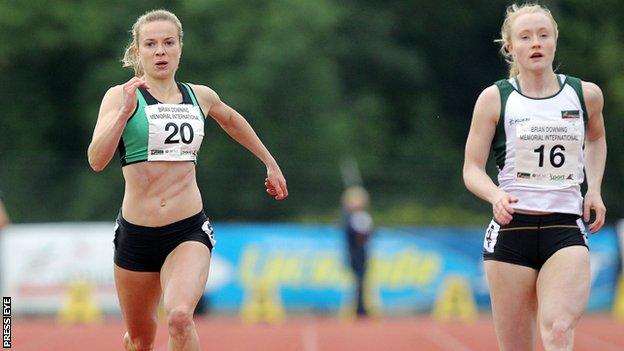 The presence of some world-class Africans didn't take the main focus off Joanna Mills in Wednesday's Brian Downing Memorial Meeting at Antrim.

Cuddihy is claiming that she and not Mills should be included in the squad.

"I really wanted to get out here tonight. It's been tough but hopefully it will soon be over," said Mills.

The Ballynure woman, who clocked 25.44 seconds to finish behind Foster [25.11] and Kirk [25.32] at a chilly Antrim, was joined at the Forum meeting by another of the Irish relay squad, Claire Bergin.

"She was up here tonight and we chatted away which was good," added Mills.

"I think it's important that we all continue to get on as hopefully, there will be championships in the future for all of us."

Bergin, who clocked 55.95 to take second in the 400m behind Kineke Alexandra of St Vincent & the Grenadines, echoed the widespread view in Irish athletics that the saga "has been badly handled from the point of view of both the athletes".

With world junior 1500m champion Hamza Driouch opting to sit in the stands, performance of the night was delivered by Djbouti's Ayanteh Soulieman who delivered a stadium record of 1:47.45 to win the 800m ahead of Egypt's Hamada Mohamed [1:47.97].

Paul McKee's absence made Oman's Ahmen Almerjabi's task a little easier in the 400m as the middle eastern athlete took victory in 47.78 ahead of Dara Kervick [48.48] and Jason Harvey [48.53].

There was also an Oman victory in the men's 100m as Barakat Al Harthi won in 10.61 seconds.

The pre-Olympic meeting honoured the memory of Brian Downing, who was a stalwart of the Northern Ireland athletics scene for many years before his death last year.