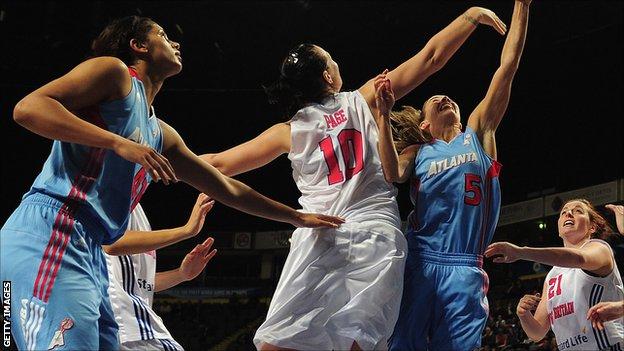 Julie Page says Great Britain want to show they can compete with top basketball nations at London 2012, but has played down their medal prospects.

"We're just trying to prove ourselves as a basketball nation and showing that we're not just here for a free ride," Page told BBC Radio Manchester.

Great Britain will be entering a side into the Olympics for the first time.

Team GB have been drawn alongside with Australia, Canada, Russia, France and Brazil in the group stages.

She continued: "In any sport, it's the biggest event in the whole world. For us to be able to be there, it's the top of the top."

The build-up to the Games has been a largely successful one for Team GB, culminating in a victory over France, ranked eighth in the world, on Sunday.

"Seeing as we're not ranked in the top 25 right now because we're a new country, it's great to beat a basketball nation," said Page, from Stockport.

Great Britain play their final warm-up match against the United States in Manchester on Wednesday, before opening their Olympic campaign against Australia on 28 July.