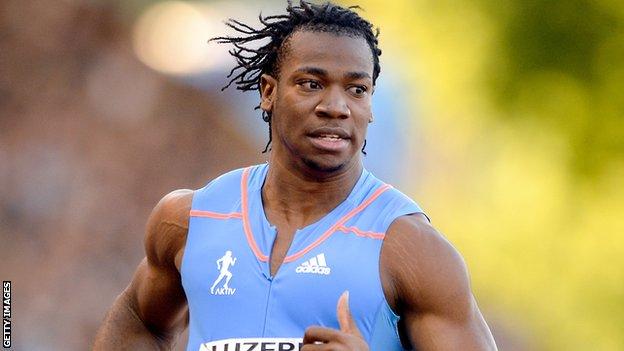 Yohan Blake said he is "on the right path for the Olympics" after winning the 100m in 9.85 seconds at a low-key meeting in Lucerne, Switzerland.

He has already beaten Bolt over 100m and 200m at the Jamaican trials.

And after his win in Lucerne, he said: "This is where I am supposed to be. Not many guys run 9.85. I want to remain unbeaten and that's what I am doing."

Blake shocked Bolt in the 100m final at the Olympic trials last month when winning in 9.75, the fastest time in the world this year and a new personal best.

"Definitely I am on the right path for the Olympics," said Blake after Tuesday's victory. "I didn't come here to run a quick time but it's still a fast time."

Blake and Bolt, who are training partners, will be the favourites for 100m and 200m gold in London when the Games start later this month. They are the only sprinters to run faster than 9.80 seconds this season.

American Justin Gatlin, who won gold at the Athens Games in 2004, has clocked 9.80 this year, while Asafa Powell, another Jamaican, has run 9.85, with Trinidad and Tobago's Keston Bledman posting 9.86.