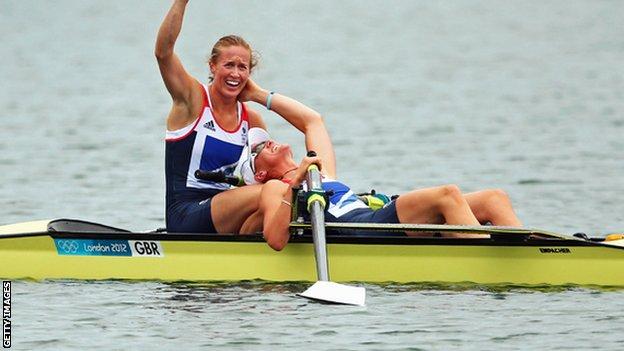 Over the past weeks, Ben Oakley from the Open University has unearthed some of the more unusual factors that make a champion and now in light of Helen Glover's journey to gold in only four years, he explores what her success demonstrates.

Four bestselling talent developments books - Outliers by Malcolm Gladwell, The Talent Code by Daniel Coyle, Talent is Overrated by Geoff Colvin, and Bounce by Matthew Syed - have the same message at their core: success equals 10 years or 10,000 hours of 'deliberate practice' and the right opportunities.

Helen Glover's story challenges some of these assumptions - until four years ago she had never picked up an oar. On Wednesday she and Heather Stanning won Britain first gold medal of the London Olympics in the women's rowing pair.

"I only started rowing in 2008 when I got through the Sporting Giants scheme where I was basically chosen for being tall and sporty," Helen said of UK Sport's talent-spotting process that fast-tracked her to success.

Glover's experience of making gold with four years of training questions the 10 year theory which originally derives from the research of Anders Ericsson in the early 1990s.

The appeal of his and others' message is its simplicity. You can become a champion simply with a strong work ethic and the right environment. These authors suggest that talent is overrated, downplaying the importance of natural giftedness - for them it is more about determination and hard work.

The 10,000 hour rule, as it is known, roughly equates to ten years (20 hours x 50 weeks x 10 years) of perspiration to get to the top. Little wonder these books are popular in the business community. But does it still add up?

It is a truism that we all improve with practice but advocates of the 10,000 hour rule go further: it is the quality of practice that is important.

Few would disagree that the ability to work persistently at weaknesses, respond to feedback and set backs whilst refining the different components of your sport is more important than just playing a lot. It also follows that excellent coaching is also needed as well as a deep seated desire to continually improve.

Helen Glover recognises the importance of coaches Paul Stannard and Miles Forbes-Thomas who shaped her initial development and Robin Williams who has made refinements in the last two years.

"Coming into rowing so quickly has been a whirlwind. I've been really lucky to have had world-class coaches throughout my time," she says.

However, there is controversy about the precise quantity of practice, since the 10,000 hour rule was derived by Ericsson asking musicians in 1993 to retrospectively recall their practice behaviour - less than reliable methodology. It is hardly surprisingly then that the theory is under increasing scrutiny.

Helen Glover's story supports increasing evidence that athletes change from one sport to another reaching international level sometimes in under two years. Tall athletes in the UK and Australia are transferring to high levels in sports such as handball, volleyball and rowing with only 3,000-5,000 hours of practice.

From athletics to skeleton bobsleigh, from rowing to cycling - multiple cases of this nature simply blows the 10,000 hour rule out of the water, leading to pointed comments that the convenient round number of 10,000 hours is little more than a 'nice motivational tool'.

Critics of the 10,000 hour rule claim it has fallen prey to the scientific tendency towards reductionism: breaking a process down into constituent parts in order to better understand it. By downplaying the natural genetic aspects of sport in favour of a nurturist perspective the complexity of becoming a champion is oversimplified.

Ericsson's research came nearly two decades before the landmark 2011 findings by Claude Bouchard on genetically determined responses to training. The fitness levels of hundreds of untrained volunteers were measured before and after five months of training.

The response in VO2max - a measure of aerobic capacity and performance - was enormously varied. Some individuals improved by less than 5% whilst others improved by 30%. Bouchard identified genetic variants responsible for this difference. People who do not respond to physical training are therefore best suited to skill based sports such as archery.

Genes clearly play a big role in determining ideal body size and muscle fibre types for different sports, such as basketball, rugby or gymnastics but recent research shows that genes have another influence.

Sports scientist Ross Tucker suggests that certain genes are associated with injury. He argues some people could never reach 10,000 hours because of their susceptibility to injury at only, say, six hours per week of training.

When is comes to talent, more and more experts now believe that the original genetic differences between us may be relatively modest but practice and other factors do the rest. There is a complex interaction at play.

Athletes who show an innate ability realise they are good at something and consequently intensify their playful practice, enjoying their superiority. Their appetite and success thus continues on an upward trajectory, particularly if they are fortunate in having the right social environment and opportunity to thrive with a good coach.

Helen Glover's rapid rise to gold demonstrates that a strong work ethic combined with excellent coaching, quality practice and the necessary physiology for your sport can combine with potent effect as long as the athlete has the hunger to commit everything.