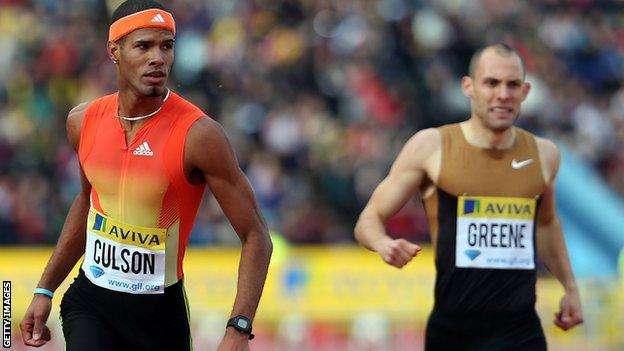 Greene has played second fiddle to rival Javier Culson so far this season but ran a personal best in Paris recently.

The Welshman was second in the London Grand Prix, his last race before the Olympics.

"I wouldn't bet against him because it doesn't matter what you've done up to this point, it's who holds their nerve in that Olympic final.

"Culson is running well, you can't control that. [But] has he got the mental strength of Dai Greene?

"You've got to remain focused and positive. [There's] a massive amount of pressure when you're at an Olympic final and Dai can handle it."

The Welshman's preparations have been blighted with injury and a virus but Thomas, the current British 400m record holder, believes he is now peaking at the right time.

"He's not had the best run-in in terms of he isn't winning all the races but what he is doing is running faster than he's ever run before," former Olympic 400m finalist Thomas said.

"This time last year he wasn't running this well. He's had a personal best.

"The one thing he can't control is his opposition and Javier Culson is unbeaten and the Puerto Rican is running very fast indeed.

"But Dai's got a great mind for it. He's got a good head for racing so things are looking good.

"A lot of the other athletes he races against are very good at the one-off races .

"But when it comes to a championship like the Olympics you've got to put together three races, three rounds.

Greene, who is also the reigning European and Commonwealth champion, has been chosen as Team GB's athletics captain.

But Thomas does not think the role will be a distraction and that Greene will remain focused as he attempts to secure Wales' first individual track and field gold since 1964.

"It's a nice honour to have but you're not inundated with youngsters on your door saying, 'we're really nervous, I can't sleep'. We've got team managers for that," Thomas added.

"The best thing about it for him is he gets to stand up and give a speech.

"He is unassuming but he's also got a good personality and actually, when he needs to, can say some very wise things.

"I think it's more of an honour for him to be called the captain of the athletics. I don't think it will be a burden.

"He's there for one reason only. Nothing can detract from his focus - he's there to be Olympic champion."