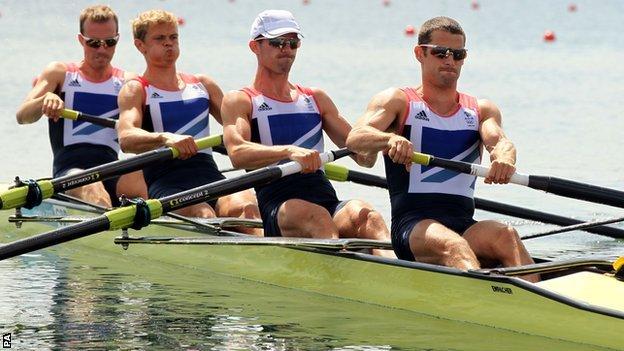 Britain's Alan Campbell also made it through to the Olympic semi-finals of the men's single scull.

"It's all going according to plan for the British lightweight four. They had a fabulous training camp and come here which such speed. I think this is a crew who could do really well."

Britain have now qualified for seven finals with six boats still to race their semi-finals.

The lightweight four, who won gold in the last World Cup, put on an emphatic performance in the heats when they overhauled world champions Australia to win.

They continued that form in the semi-finals, pacing themselves through the first 1500m before upping the stroke rate and coming through to secure their place in the final.

Campbell, who finished fifth in Beijing, got out of the blocks quickly, extending his lead to more than a length by 1,000m.

German Marcel Hacker began to close but two-time world bronze medallist Campbell was well clear and cruised across the line in a time two seconds quicker than that achieved by favourite Mahe Drysdale of New Zealand in the first heat.

In the men's double sculls, Britain's Sam Townsend and Bill Lucas, who finished second in their opening heat, edged into Thursday's final with third place in their semi-final, but the Australian defending Olympic champions were knocked out.