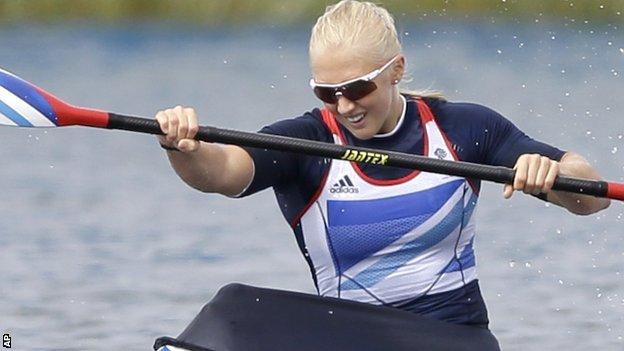 Great Britain's Rachel Cawthorn made it through to Thursday's final of the women's kayak single (K1) 500m.

"What a performance from Rachel Cawthorn. We said she was going to step it up with each performance and she did. It was a solid performance. She is an excellent competitor. Off the water, she can come across as timid but she is one focused athlete on the water."

Cawthorn won her heat and was second in her semi-final to progress through to challenge for a medal at Eton Dorney.

GB's Abi Edmonds and Louisa Sawers did not have the same success in the women's kayak double (K2) 500m.

They sneaked into the semi-final, in which they finished sixth of seven pairs, and failed to make it through to the final.

In the men's competition, heat winners Slovakia and Hungary will be joined by first the six from the semi-final - Australia, Germany, Czech Republic, Russia, Romania, Denmark - for the kayak four (K4) 1000m final.

Germany and Azerbaijan were the heat winners in the men's canoe double (C2) 1000m.

They made it through to the final while Belarus, China, Czech Republic, Cuba, Romania and Russia qualified through the two semi-finals.