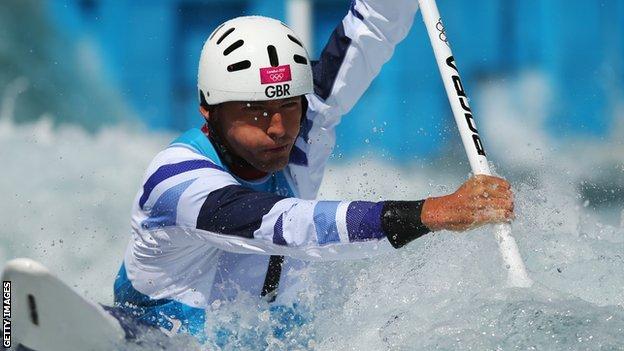 Great Britain's David Florence has progressed to the C1 semi-finals with a brave performance at the canoe slalom event at Lee Valley.

The Beijing silver medallist was 13th of 17 canoeists after the first run, with only the fastest 12 progressing.

But the world number one kept his cool on his second run to achieve the fifth-fastest time of the session.

"It's a relief to go through and a great experience to go last in front of this crowd," Florence told BBC Sport.

"The first run took me by surprise and was a bit of a struggle but I looked at the video so I knew which bits I had to get right."

Slovakian Michal Martikan, a two-time Olympic champion, finished fastest in the C1 heats while Germany's Hannes Aigner topped the times in the K1.

The C1 semi-finals and final take place on Tuesday with the K1 following suit on Wednesday.