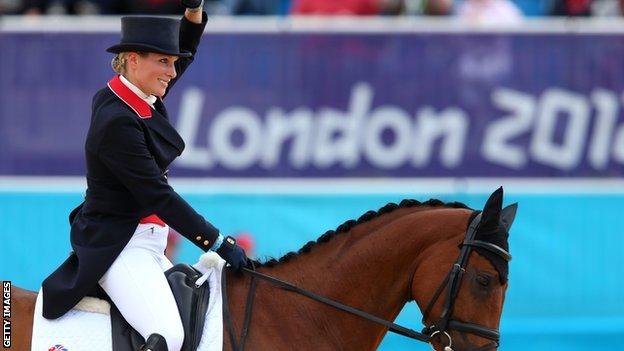 Great Britain are third after the opening dressage stage of the team eventing competition in Greenwich Park.

The three best scores of the five riders in each team decide the medals.

Germany have four riders in the top 11 after the dressage, meaning they could afford to drop world champion Michael Jung's score of 40.60.

Phillips, 31, said: "It was incredible to be selected and to be here at home for the Olympics is an amazing feeling."

Double Olympic bronze medallist Cook said: "At the Olympic Games, you hope you are not going to have rain, thunder and lightning thrown at you, but I did and I had to deal with it."

On Monday, riders face the 28-obstacle cross-country course through Greenwich Park. Competitors must complete the course in 10 minutes, three seconds or else they will pick up time penalities.

"We just hope it doesn't rain too much because it will be very slippery around those corners on the cross-country course," Cook added.

"The horses do have studs in their shoes, but if horses are slipping then you will just have to steady around some of the corners, so therefore time faults will rack up."

Japan's Yoshiaki Oiwa leads the individual standings on 38.10, with Italy's Stefano Brecciaroli second on 38.50 with New Zealand legend Mark Todd, the Olympic gold medallist in 1984 and 1988, third on 39.10.