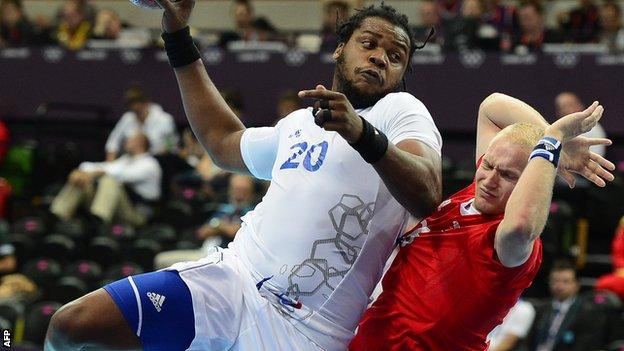 Great Britain's men were outplayed by defending champions France on their Olympic debut in London.

The home side made a lively start, with Steven Larsson scoring GB's first goal, but France were ruthless in front of goal and led 21-7 at half-time.

Larsson was sent off in the second half and France took full advantage, with Guillaume Joli contributing 11 goals.

Britain kept France close early on, trailing 5-7, but the champion's superiority shone through as they rattled in seven unanswered goals.

Britain's task was made harder seven minutes into the second half when Larsson was dismissed for tripping Nikola Karabatic, although replays suggested the former world player of the year tripped over himself.

France were not in the mood to ease off and they converted 75% of their shooting chances to run out comfortable winners.

Britain will need to improve their finishing if they are to muster their first Group A victory in the Copper Box when they face Sweden on Tuesday.

The Swedes beat Tunisia 28-21 in their opening game.

Iceland beat Argentina 31-25 in Group A's other fixture, while Croatia and Spain beat South Korea and Serbia respectively in Group B.