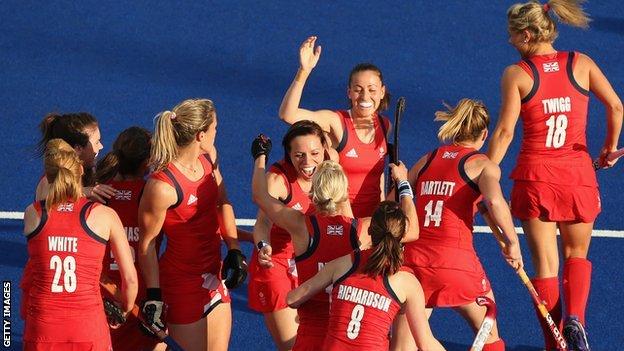 Great Britain's women began their campaign for hockey gold with a thumping 4-0 victory over Japan in Group A at the Riverbank Arena.

Alex Danson gave GB the perfect start with a reverse-stick finish after seven minutes and Sarah Thomas, Sally Walton and Danson made it four by the break.

It was incredible to score. I can't believe I'm at home and my family are watching

There were no more goals in the second half, but late injuries to Kate Walsh and Helen Richardson were concerns.

Britain will play South Korea in their second group match on Tuesday.

The Koreans lost their first match of the tournament 4-0 against China earlier on Sunday, while reigning champions the Netherlands were comfortable 3-0 winners over Belgium in the remaining Group A match.

"I thought that was a very thorough performance," said GB coach Danny Kerry. "We took our chances in the first half. I felt we were tight and disciplined. In the second half we hit the post and their keeper made a good save."

Danson added: "To come out and win our first game was exactly what we dreamed of and have worked towards.

"It was incredible to score. I can't believe I'm at home and my family are watching but if I'm completely honest I don't mind who scores, as long as we score one more than the opposition."

Great Britain, ranked fourth in the world, will be confident of getting one of the two semi-final places on offer from the group after they brushed aside the Japanese challenge within half an hour.

With a four-goal lead, the second half was a quiet affair - a green card and trip to the sin-bin for Anna Panter providing the only drama until Crista Cullen struck the post from a penalty corner late on.

But with six minutes remaining, captain Walsh was struck in the face by a Japanese stick when attempting a tackle and after some time being treated she left the pitch applying ice to her injury.

Playmaker Richardson then had to be helped off moments later, potentially taking the shine off a strong performance.

Walsh was taken to hospital for an assessment on a facial injury, with an update on her condition expected on Monday.

In Group B, New Zealand beat Australia for the first time in Olympic history thanks to a third-minute strike by Cathryn Finlayson.