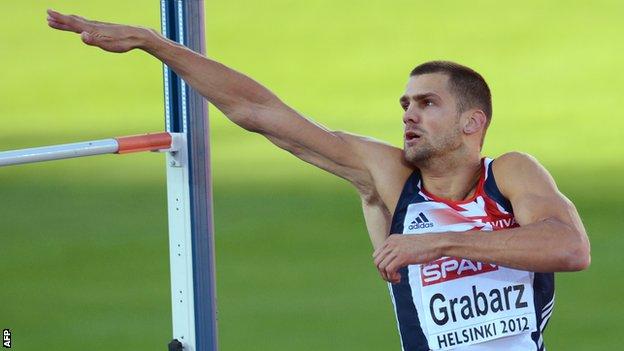 British high jumper Robbie Grabarz underlined his status as an Olympic contender by finishing second in the Diamond League meeting in Monaco.

The 24-year-old cleared 2.33m at the third attempt and narrowly failed to match his 2.36 personal best.

American Jesse Williams, the only other man to clear 2.33, won on countback after only taking one attempt at 2.26.

Britain's Holly Bleasdale was third in the women's pole vault as Yelena Isinbayeva failed to register a height.

The Russian two-time Olympic champion failed with all three attempts at 4.70m, while 20-year-old Bleasdale was one of three athletes to clear 4.62m.

German Silke Spiegelburg announced herself as a major threat for the Olympics by clearing a new personal best of 4.82m to take victory.

"I don't know exactly what was going on," a bemused Isinbayeva told BBC Sport. "My run-up and physical condition were good and I expected to do well. But all three jumps were completely different and I am not stable yet."

He told BBC Sport: "I knew it was there. I've started to compete again and have some fun with Jesse [Williams] again."

And of his rivalry with Williams, the reigning world champion, he added: "We're great friends and genuinely love jumping with each other, we spur each other on and have a great time out there."

Britain's Chris Tomlinson followed up his season's best of 8.26m at Crystal Palace with a leap of 8.01m in the long jump to finish third behind Olympic champion Irving Saladino (8.16) and Australian Mitchell Watt (8.12).

It was probably one of my worst performances, but it's good to be frustrated and still run a PB"

Reigning Olympic 400m champion LaShawn Merritt suffered an injury scare a week before the Games as he pulled up clutching his leg after 300m, but the American later brushed off any concerns that he might not be able to compete in London.

"I'm ready," he told BBC Sport. "I was feeling good but I got a 'grab' in my leg, and then felt it again, so decided not to push through it. I have got the Olympics coming up, so I will get some good treatment."

Belgian Jonathan Borlee took a surprise victory in 44.74 seconds, with his brother Kevin in third behind world champion Kirani James.

Britain's Martyn Rooney was disappointed to finish sixth in a time of 45.52 seconds.

Jeter and Allyson Felix were involved in the 4x100m relay, but a mix-up between Jeter and Jeneba Tarboh on the final change-over meant the leading American team did not finish the race, their second-string squad taking victory instead.

But the leading US men's team - with Justin Gatlin on the second leg and Tyson Gay on the third - set the fastest time in the world this year - 37.61 seconds - despite two poor changeovers, beating a Jamaican effort of 37.82 seconds in April by a quartet featuring Usain Bolt and Yohan Blake.

"I felt good and it's good for the confidence," said Gay. "At the current time, the third leg seems to be the best position for me."

American Aries Merritt delivered a third consecutive sub-13 second 110m hurdles victory - equalling his world-best time of the year of 12.93 - to establish himself as favourite for gold in London.

The depth of middle-distance talent in Kenya was again underlined when Abraham Kipchirchir Rotich pipped compatriot Leonard Kirwa Kosencha to set a new national junior record and personal best of 1:43.13 in the men's 800m.

Britain's Andrew Osagie struggled to stay with the leaders but still ended with a new personal best of 1:44.48 in eighth.

"It wasn't a bad race but I wanted something more," he said. "I missed a few opportunities and it was probably one of my worst performances, but it's good to be frustrated and still have run a PB."